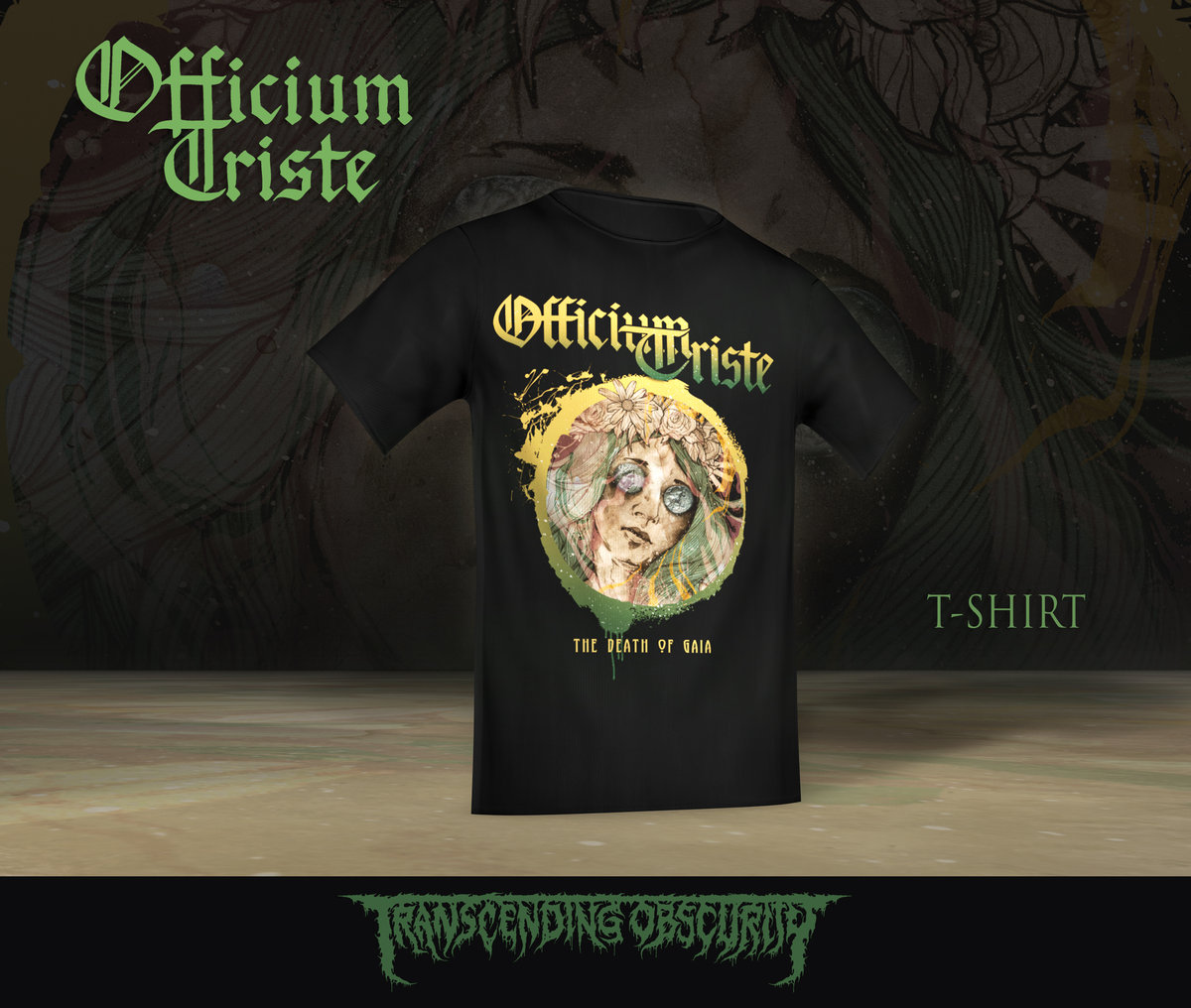 Now get the beautiful Chris Smith artwork print on a T-shirt. These T-shirts are 100% cotton and thicker than your average one. It’s a full colour large print too. They ship around the release date itself.
[bandcamp video=3903244470 width=560 height=435 bgcol=333333 linkcol=0f91ff]

Dutch death/doom metal legends OFFICIUM TRISTE, who have been around for 25 years, are back with their sixth full length album titled ‘The Death of Gaia’. They’re only wiser with age, for the music is just as evocative as always if not more this time around, with better arrangements and variations spread across the album. Their music has this gentle yet overwhelming approach that will leave you in complete tatters by the time it’s done. It’s beautifully hinging on this balance they’ve perfected over decades between plaintive melodies and wretched heaviness. Additional instruments such as piano, violin and cello have been brought in and even several guest vocals to lend to this an epic air, further entrenching their mastery over this form of poignant music. For this album they’ve employed the services of Chris Smith (Grey Aria Design Studio) for the vibrant artwork and of Greg Chandler (ESOTERIC) where mastering is concerned, ensuring that everything is done just the way it was meant to be. ‘The Death of Gaia’ is the pinnacle of the band’s illustrious career and sets new standards even now for others to look up to.

Line up –
Martin Kwakernaak – Keyboards, Acoustic Guitars
Gerard de Jong – Guitars
Pim Blankenstein – Vocals
Niels Jordaan – Drums
William van Dijk – Guitars
Theo Plaisier – BassAdditional vocals by Vigo van Dijk and Chiara Kwakernaak on ‘Just Smoke And Mirrors’ and Mariska van der Krul on ‘The End Is Nigh’ and ‘The Guilt’.
Additional violins by Chris Davies on ‘The End Is Nigh’ and ‘Just Smoke And Mirrors’.
Additional cello by Elianne Anemaat on ‘The End Is Nigh’ and ‘The Guilt’.Drums recorded at Studio Plug Unit, Reeuwijk, the Netherlands. Engineered by Hans Pieters.
Guitars, bass, keyboards and vocals recorded at El Pato Studio, Bergweiler, Germany. Engineered by Martin Kwakernaak.
Additional guitars and vocals recorded at Hubert’s place, Amersfoort, The Netherlands. Engineered by Hubert ter Meulen.Mixed by Hans Pieters and Officium Triste at the People’s Noise, the Netherlands.
Mastered by Greg Chandler at Priory Recording Studio, UK.