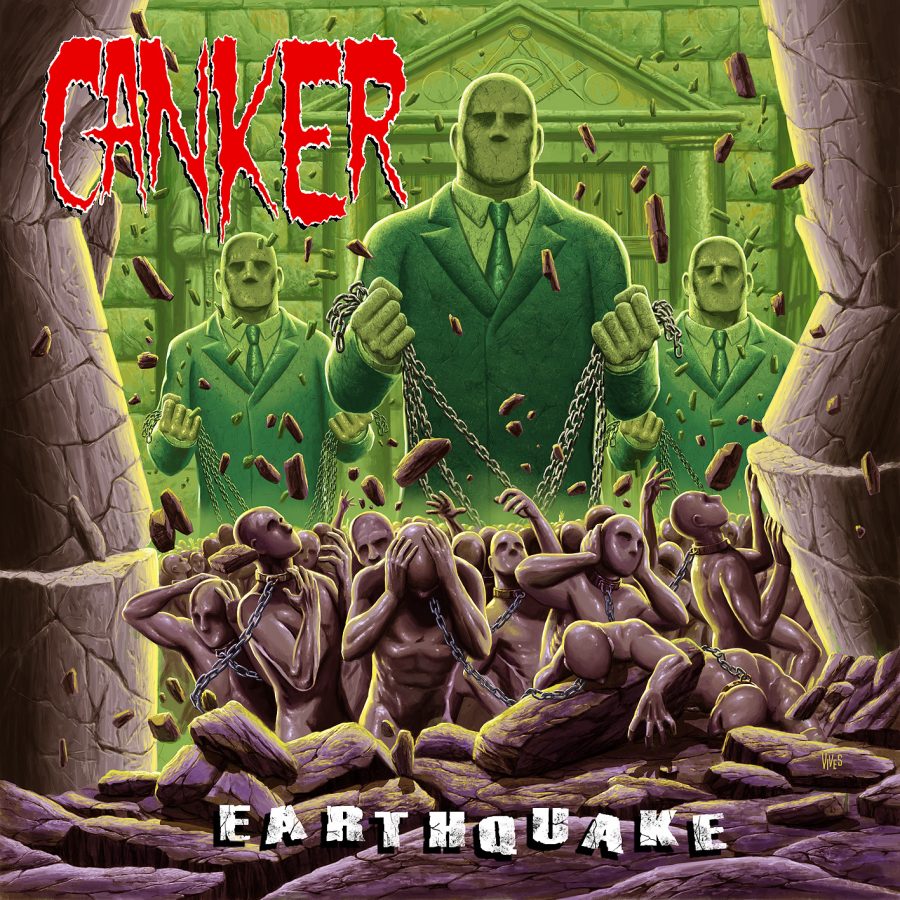 While not as well-known abroad, the 90s Spanish death metal scene had quite a few noteworthy bands that contributed their own take on the genre.  Through the efforts of Xtreem Music a lot of these groups have had their earlier material re-issued and offered up new albums, sometimes a decade or two after they were last heard from.  This is the case with death/thrash band Canker, who originally re-issued their 1994 debut ‘Physical’ in a compilation that included their earlier demo material.  Now they’re set to release their third full length album ‘Earthquake’ on September 18th, their first all-new material since 1997’s ‘Exquisites Tenderness’.  What you may not know is that this actually isn’t a brand new record from the current incarnation of Canker, but rather a previously finished and unreleased album that’s been lying dormant since 2005.  But you wouldn’t know it upon first listen, and it gives listeners a window of where the band was at this point in time and where they’re likely to be headed in the future.

Today we’re excited to premiere the title track from ‘Earthquake’ in the form of a lyric video.  This song showcases everything that the band excels at, starting off with a thrash-centric riff alongside vocals that move between gruffer clean ranges and low-pitched death growls.  The riffs are catchy and Canker wastes little time in leading right into a scorching solo and gnarly bass line.  But as you make your way through the five minute run-time, there are some unexpected twists and turns.  Thrash gives way to more aggressive death/thrash that blurs the lines between both genres, and then three quarters of the way in the band slows the pace down and throws in some synthesizer work that creates a darker and moodier atmosphere.  The rest of ‘Earthquake’ incorporates elements like this, with everything from synth melodies to jazzier percussion breaking up the onslaught.  It’s an album with a lot to offer, and I’m glad that it’s finally seeing the light of day.

‘Earthquake’ is out on September 18th via Xtreem Music.  To learn a bit more about this album and the band’s current incarnation, we had the chance to ask them a few questions.

Transcending Obscurity (Chris Dahlberg): Thanks for taking the time to answer these questions.  It has taken twelve years for your third album ‘Earthquake’ to see the light of the day.  Can you tell us about some of the challenges the band faced that led to this lengthy incubation period?

Canker: Hi, thanks for the interview. The band has had several changes since the beginning.  After the first album there was a pause and comeback with other members with whom we made the second album, after which there was another stop along the way. Then at the beginning of 2000 we formed it again and recorded our third album in 2005, which will come out in September of this year.

TO: I understand this material was recorded in 2005.  Were there any additional tweaks to this version that is now releasing on Xtreem Music or have you left it as is?

Canker: The material that is reflected has not been revised or changed in any aspect, it  is still the same recording we did in 2005. No new songs have been added either.

TO: Canker has gone through quite a few lineup changes over the past two decades, but it looks like you have a steady roster in place now.  Can you introduce us to the current members of the band and tell us how they became a part of Canker?

Canker: Since the last return of the band three years ago there were several changes, specifically drums and guitar. Antonio, the bass player that participated in the recording of ‘Earthquake’ proposed to me to form the band again and then we made a call looking for battery and vocal. In the last few months drummer Eduardo Cervera and guitarist Yohe Herranz have been incorporated along with bassist Antonio Leon, guitarist Miguel Hernandez, and vocalist Leo Gonzalez.

TO: ‘Earthquake’ pulls from plenty of old-school death metal and thrash influences, but you also branch out and incorporate some more experimental elements.  I have to admit that the keyboards on some of the songs and the percussion on Leyla Island caught me by surprise the first time I listened. What are some of your influences when it comes to music outside of metal, and how do you balance these elements with the heavy hitting death/thrash?

Canker: In the second album we started to incorporate other instruments, mainly synthesizers, to create a different environment. Our influences come from investigating the classic music, ethnic, folk, and other styles that transform the music in general. The incorporation of these sounds into metal is viable since rock admits any influence that is carried out with discretion.  Experimentation is fundamental when expressing an idea that is personal and unique.

TO: Has the current lineup of Canker already started writing new material?  If you have, how would you compare the direction of your current songwriting to the tracks on ‘Earthquake’?

Canker: We’ve been working on new material. On this occasion, as well as previously, the essence and philosophy of the band continues to be adding more hardness and speed to the compositions, sometimes approaching brutal death metal. Nevertheless we reintroduce the presence of other instruments and influences to give a touch of innovation to the issues without leaving aside the old school. 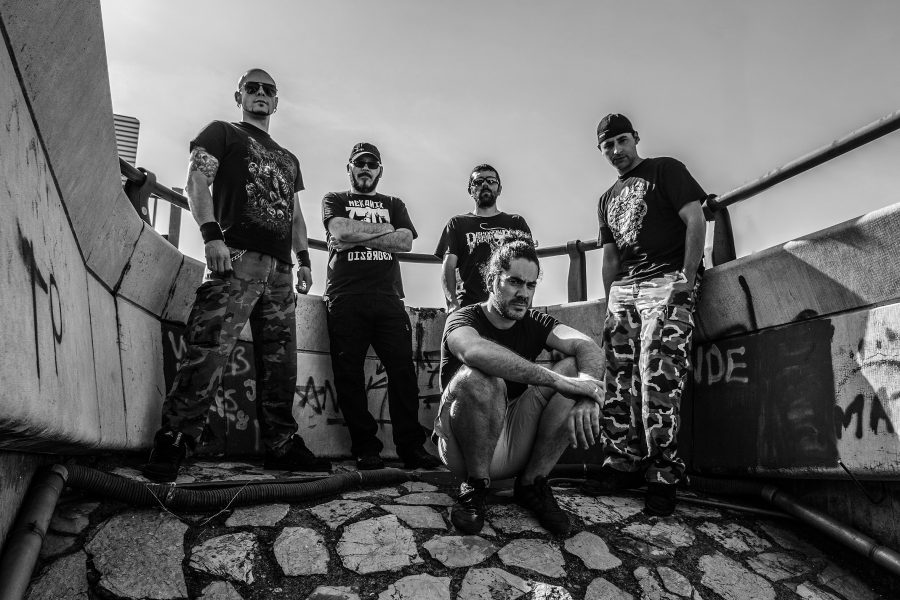 TO: Jose Vives painted the artwork and he did a fantastic job.  What made him the right choice and how does the art he’s created tie into the concepts explored on ‘Earthquake’?

Canker: The design is linked to the concept of the album in the sense of reflecting what is happening under the infamous influenza of this corrupt and manipulative system in which we are submerged. It is the representation of the elites trampling the enslaved people and subjected to the global dictatorship in which we are trapped. The lyrics reflect the struggle that must be undertaken to end this situation.

TO: Xtreem Music approached you and reissued ‘Physical’ back in 2014.  Can you tell us more about this and what it’s been like working with the label?

Canker: At the time of and coinciding with the twentieth anniversary of the first edition of ‘Physical’, Xtreem Music contacted us and asked if we were interested in reissuing a remastering of the album with unpublished material. We found the proposal and the conditions interesting so we decided to work together. Xtreem Music has a lot of experience in these proceedings and everything was perfect.

TO: Thanks to Xtreem Music I’ve found a lot of great metal from Spain, but I’m sure there is plenty more that slips under the radar.  What are some other bands you would recommend, and how do you see the Spanish metal scene presently?

Canker: Effectively at present there are numerous bands in the national scene. Of course there are those who bring interesting things and those who do not. The important thing is to do a work based on the personality and especially on the truth. There are currently interesting bands like Perpetual Night, Wormed, or Looking For An Answer to highlight a few.

TO: You’ll be playing at the Legends of Death Fest in November, are there any other live performances currently in the works?

Canker: Apart from this festival, we are organizing the ‘Earthquake’ debut in Granada and some other locations.  In February we will have some performances along with other bands like Necrophiliac, and hopefully we’ll finalize more dates for the future soon.

TO: Is there anything else you’d like to say about ‘Earthquake’ or Canker?

Canker: We invite you to listen to our new album. It is a new metal concept with different sounds that is still based in the old school. See you soon on the stage. Thanks.