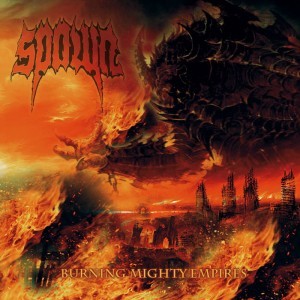 Spawn are one of the most underrated death metal bands. Admittedly, they’re not the most original but they’re taking the very essence of death metal that we love so much and exaggerating the positives. Imagine a cheese pizza, dark beer or a fruit salad – it’s like that. If you’re looking for something death metal, this is the essential stuff. It makes death metal proud. It makes us as fans proud. It’s a reminder why we love this style of music. Most of our readers, I’d like to imagine, got into death metal of the ‘90s. Surely they all have their original favourites, ranging from Obituary to Deicide or even Morbid Angel or Death. While all of them encapsulate death metal in its different avatars, Spawn go for the jugular – the outright heaviness part of it. As I highlighted this regional style of death metal from Germany in my review of Reckless Manslaughter, it’s basically a commingling of Massacre ‘From Beyond’ era of death metal and the time when brutality began to seep into the style in a significant way – somewhere in the mid/late ‘90s (sure NYDM and other forms existed but I’m talking about shameless brutality a la Devourment). Spawn, by the way, formed in 1998 and this happens to be the band’s fourth full length album and probably the best one yet.

Musically, it’s crushing. Devastating. Mind-blowing. It’s all a part of you wants but is left begging for more or has to contend with more brutality at the expense of dynamics. Spawn retain the essence of death metal, the massive ear-shattering inhuman roars coupled with bludgeoning beats, heart rate-accelerating riffs and all round mayhem, devoid of solos however. It’s not a blast-fest from start to finish like most brutal death metal bands of today. It’s not death metal redundancy. It’s the original expression of death metal taken to a more logical extreme, with the emphasis being on the core elements. Everything is magnanimous. The vocals are over-the-top and so awesome, the riffing is meatier than a herd of brontosaurs and the drumming is heavy-footed and urges the music to not remain stagnant. There’s a drive in this music which makes all the difference. This is no chuggy affair, be it of the Six Feet Under kind or the early Devourment type. This is thrilling death metal, Godzilla kind of larger-than-life sounding death metal. There’s all in it. You can’t miss it for anything really if you call yourself a metalhead, especially a death metal one.

While the band indulges in different forms of death metal clobbering, the highlights are when the band employs catchier, humming kind of riffing as in the closer Unholy Shadows. It adds a different dimension, shades of emotion even in this bludgeoning brutality. It’s reminiscent of Deeds of Flesh circa ‘Path of the Weakening’ and also Grave when they used to grate bodies like nobody’s business under their heaviness. It is strongly comparable to another underrated German death metal band called Fearer. Almost all the songs start off with a tiny intro but they snowball into something fearsome, terrifying even and almost certainly highly enjoyable. Variations are plenty, which is quite a feat, but the sound doesn’t change and the ingredients aren’t compromised. Heaviness remains intact and so does your inner metalhead (there’s one in all, diminishing with age ironically). There’s no unnecessary technicality or core breakdown, which means the band members know what they’re peddling in and what they require to do.

This is utterly satisfying. ‘Burning Mighty Empires’ is probably the best meat-and-potatoes kind of death metal release I’ve heard in recent times. It’s a powerful album to say the least and there’s enough substance in there to last for multiple listens.