I wouldn’t consider Paraguay one of the more well-known sources of death metal, but Verthebral seems ready to change that. This fearsome four-piece has been stewing 10 songs for their full-length debut, “Regeneration,” and it’ll be ready to serve on June 29th via Satanath Records. To whet your appetite, we’ve got a sizzling new song premiere for you — introducing Old Man’s Memories. 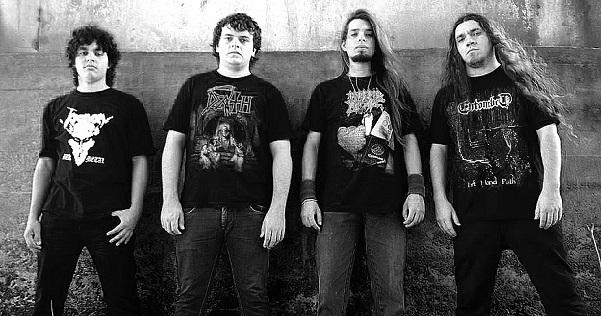 An aggressive palm-muted assault opens up the song, clearing space for double bass to thunder by, bolstered by powerful bass clanking in the background. An uptick in tempo takes the verse to a neck-breaking pace before winding back to the intro/chorus, which with the addition of repugnant vocals has taken on an anthemic (if still pleasantly putrid) quality. We’re then treated to two solos, both of which have their own distinct personality while maintaining the level of antagonistic energy. The odd-time bridge that follows is death metal perfection — I feel guilty admitting that something so brutal could be so catchy, but there you have it. A final short sprint aided by double bass downbeats and a unified guitar attack takes us to a final chorus and catastrophic outro.

Old Man’s Memories is but one meaty slice of “Regeneration,” but I’m already hungry for the whole thing. Verthebral proves they’ve got the chops and songwriting skills to put their country on the map. We’re betting the final result will be a real treat.

Sweet! Thanks a lot to Paul Mackins from the UK fo

Here’s another pic of the @liveburial LPs! They

20% off for the first time at our US store (Indiem

Thanks to @xjoans.waxlifex for the support for the

We're thrilled to also offer vinyl for the killer

Thanks once again to @king_of_the_hill_8185 for th