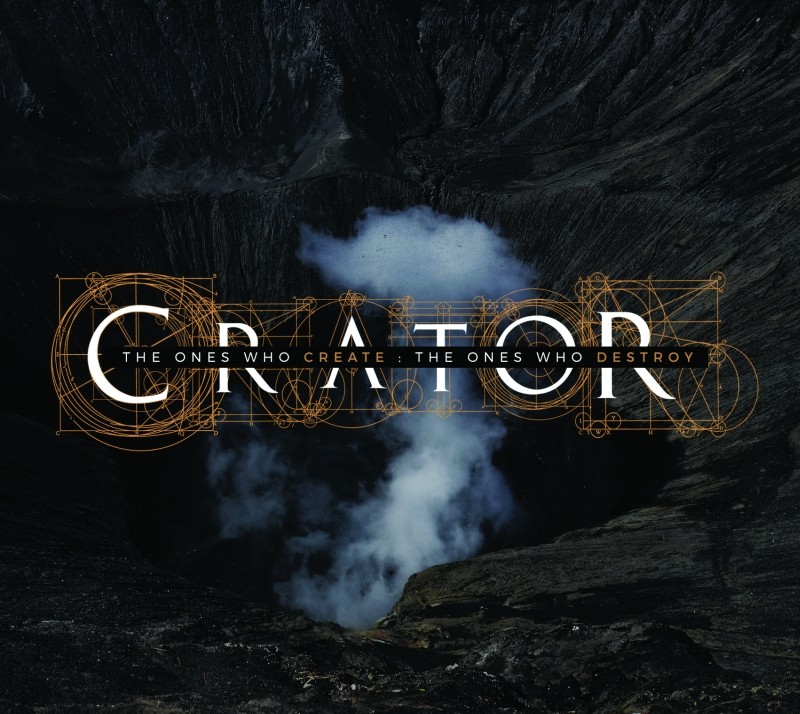 Crator’s debut full length ‘The Ones Who Create: The Ones Who Destroy’ completely snuck under my radar when it came out back in September, coming to my attention a little over a month later thanks to a promotional push from Clawhammer PR.  You’re likely to see the New York based band branded as a supergroup, though I prefer to think of them as a group comprised of metal musicians whose other projects I am a big fan of.  Formed by Jeff Liefer (Tentacles), Jason Keyser (Origin, ex-Skinless), and John Longstreth (Origin, Dim Mak, and a whole slew of other important death metal bands over the years) with Colin Marston (Gorguts, Dysrhythmia) playing bass and working the boards, that wealth of talent is evident throughout.

There is certainly an air of familiarity to ‘The Ones Who Create : The Ones Who Destroy’, as the emphasis on blistering technical riffing and drumming are what these guys do best.  But with Crator, it’s clear that they have pushed each other outside of their respective comfort zones and worked to create material that emphasizes darker tonality and atmosphere as much as it does blistering technicality.  Each song is a flurry of fast paced riffing and adventurous bass lines that help to fill out the sound quite a bit, and the more time you spend with this album the more details that pop out at you.  The first time through I was focused on the pounding drums and technical meets dissonant feel of the guitar leads, but on subsequent listens I’ve been struck by just how fluid and interesting Colin Marston’s bass work is.  Plus you have Jason Keyser’s familiar growls that stand above the instrumentals and add even more density, which helps tremendously.  Crator has the darkness and despair that is likely to attract listeners that don’t usually skew towards technical death metal, while still having some of the flashiness that fans of that style want.

We had the chance to ask some questions about how Crator came together given the busy schedules each of its members keeps, as well as find out more about the process behind the debut. Answers are provided by Jeff and John.

Transcending Obscurity (Peter Kotikalapudi): You are all part of well-known bands (Origin, Krallice etc.) How did you get together and form the band?  Has everyone known each other for a while from being involved in so many different projects?

Jeff: This is mainly a result of the metal community being small and somewhat incestuous. Jason and I were involved in the same scene since we were kids so we would often cross paths. I met John when he first joined Skinless back in 2003 when he relocated to New York from Kansas. Colin became part of this project shortly after John was part of Gorguts’ 2013 record ‘Colored Sands’.  It was clear with our combined abilities this was going to be a powerhouse of a project.

TO (Chris Dahlberg): Where does the name Crator fit in with the music you’ve created?  Is there one member in particular that suggested the band name?

Jeff: We set on this name early on in the project. We wanted the name to somehow reflect the tone of the music. This was a collection of songs which were chaotic and intense but with darker feel that keeps each one connected as a single driving force, not simply a collection of fragments.

TO (Chris/Peter): Your album ‘The Ones Who Create: The Ones Who Destroy’ has the dizzying technical elements one would expect given your backgrounds, but there’s a noticeable emphasis on a darker, unsettling atmosphere as well.  You mentioned previously that this was mainly written in jam sessions with the bass being added afterwards.  Is this a significant change from how you write in your other bands, and how did jamming together allow you to push beyond your usual comfort zones?

Jeff: We initially began getting together as a way to simply push our boundaries and experiment outside the confines of our respective projects. The aspect of simply jamming created a sound that we could approach more fluidly, steering clear from any rigid structure brought on by writing parts separately. Colin as you know is an innovator as well as a top notch player and audio engineer. We approached Colin with the idea of having complete creative freedom with his contribution to Crator and he certainly took it by the horns. He helped to create the off kilter dissonance that makes these songs so unsettling and standout as something unique.

TO (Chris): Seeing that Jason and John are both in Origin, a band that is on tour for much of the year, how often were you able to meet to work on material for Crator?

Jeff: Recently, we try to meet at least once a month to play our material. During the writing process however, John and I would generally meet up twice a week.

TO (Peter/Chris): The album was recorded by Colin Marston at The Thousand Caves (thethousandcaves.com) in Queens, NY. What was the recording process? How long did it take?  Did having Colin Marston working behind the boards and as a session member on bass make the process fairly easy?

Jeff: The recording process was spread out across 5 or 6 months. This was due largely to conflicting schedules and unforeseen setbacks.  That aside, having Colin record the album and track bass made the time we did spend in the studio a productive and legitimately enjoyable experience.

TO (Chris): Back in January you released a cover of Angelcorpse’s “Into the Storm of Steel”, which was recorded during the same session as the album material.  It makes sense to do an Angelcorpse cover given John’s past involvement in that group, but what made you choose this particular song?

John: Wanted to re visit some material from my childhood, this song stood out as a strong favorite.

TO (Chris): You have self-released the album instead of signing to a record label. Was it a conscious decision to remain independent in all aspects, considering many of your other projects have been involved with bigger labels?

Jeff: We were in a unique position that allowed us to produce this independently.  Having other established projects gave Crator the ability to evolve naturally without any external pressure or influence. We are all very active in the scene, so it was easy to source what we needed.  Almost every contribution to this project was through someone we knew or recommended to us by friends in the industry.

TO (Peter/Chris): Recent interviews mentioned the possibility of live performances.  With everyone in different projects, would these be limited to New York and surrounding area or is there the possibility of a longer tour?  Colin is mentioned as a session member on your Facebook so would he likely not be a part of these live shows?

Jeff: We currently have our first show booked on Jan 14th in Chicopee Massachusetts. We are entertaining to the possibility of more shows and tours in the future.

TO: With the album now out and the end of the year approaching, what does Crator have planned as we approach 2017?

Jeff: We are continuing to write and have been discussing future releases. Expect more from Crator in 2017.