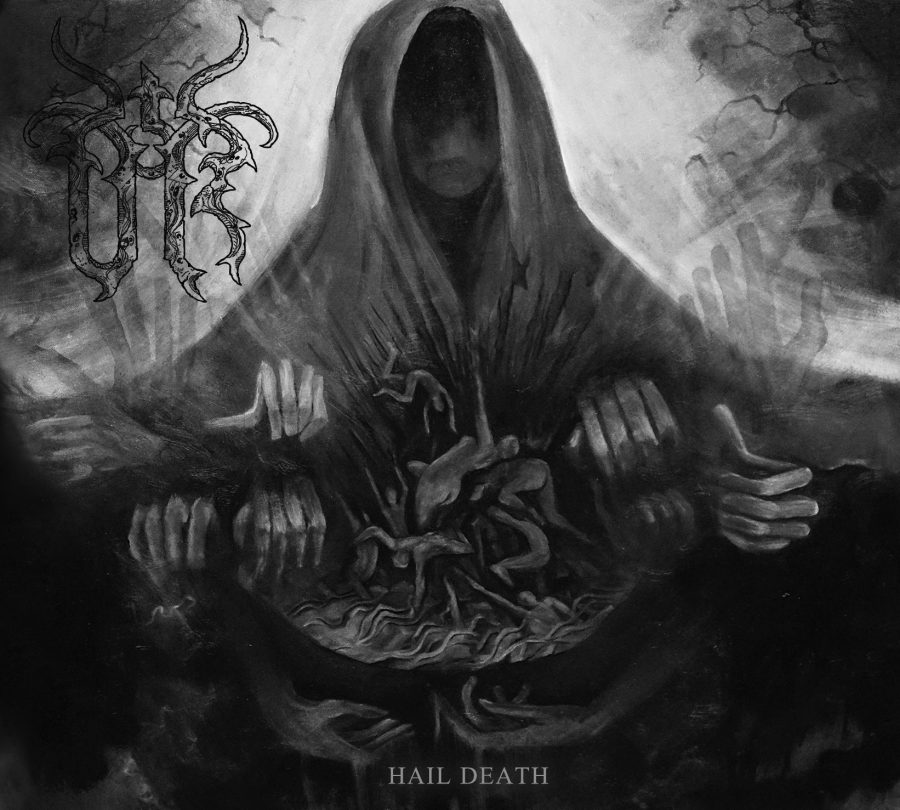 Poland continues to be a hotbed for some of the strongest death and black metal out there, and with labels like Pagan and Arachnophobia releasing material on a regular basis it can be hard to keep up.  One release that caught my attention right towards the end of 2016 was the debut EP from UR, the six-song ‘Hail Death’.  Coming in at a little under twenty minutes, UR keeps their songs on the shorter side but accomplishes a lot with each one.  Rather than simply laying down fierce, unrelenting black metal like some of their country mates, this band delivers equal amounts of harsh black metal and somber melodic passages that have a doom and gothic tinge to them.  It’s a strong first showing that hints at even greater things still to come, and is another example of a Polish act that already feels like they’re pushing outside of the usual genre boundaries from the very beginning.

I had the chance to send over questions to UR’s vocalist Gregor, who also plays in Bloodstained and Bloodthirst, to find out more about what went into ‘Hail Death’ and what the future holds for this promising newcomer.

Transcending Obscurity (Chris Dahlberg): Thanks for taking the time to answer these questions. ‘Hail Death’ came out right around the end of the year, during the period where most sites and readers are obsessed with endless best of the year lists. Given the release timing, have you been pleased with the overall response and are you starting to notice more people discovering UR now that we’ve moved into 2017?

UR (Gregor): I was and am glad for the reaction to this album. ‘Hail Death’ is a great opening for a new chapter in our musical life. The task of this MCD is to promote a completely new project, which is not easy nowadays, where a lot of very successful albums appear every month. Our debut was, however, noticed, and the name UR began to consolidate in the minds of listeners. There are very positive reviews from around the world, we cannot complain about a small number of reviews or interviews, I am very happy as I did not expect such a good reception! The release date certainly did not hurt us, although actually as you mentioned December is the time of summaries and album lists of the year…

TO: UR formed from your previous band Recall, and you said in a previous interview that the decision to start fresh under a new name occurred in December of 2015. Seeing that ‘Hail Death’ was released only a year later, when did you begin writing what would ultimately become these six songs?

UR: The material was created very quickly, it seems to me that it was about 3 months.  However, preparing graphics or finding the right publisher took much longer. We had everything already registered around June 2016 and the contract with Arachnophobia was confirmed a month later, however, the release date was set in December. This is sometimes the case. However, we did not idle at that time, we started preparing for concerts and media promotions.  Everything was done calmly according to the previously planned plan, and so we avoided mistakes.

TO: Gregor was vocalist for Recall and plays guitars for Bloodthirst and Bloodstained. For UR he is doing guitars and vocals. How big of an adjustment was this combination and how did it contribute to the approaches you took for songwriting?

UR: The performances of Bloodstained as well as Bloodthirst are quite different because in both of these bands I am the second guitarist who usually plays the music invented by the leaders of these groups … With these bands I develop as a musician, gaining stage experience but I have little involvement in the creation process. In UR the story is completely different, in this band I am a composer, a lyricist, and I influence the visual sphere of the band and the whole concept. I’m a leader, and I feel good about it even though it’s my responsibility to be on my shoulders, it’s a stressful role, but it’s also a driving force and stimulates ambition!

I just love the sad melodies that bring the melancholy mood and nostalgia for a short time, to be broken up in a moment full of aggression and aggressiveness

TO: Bloodthirst/In Twilight’s Embrace member Marcin Rybicki handled the recording and mixing for ‘Hail Death’. Can you tell us more about these sessions and what input Rybicki had that contributed to the final release?

UR: The sessions were very short and took place in our rehearsal room. We were very keen on the sound of the disc to be as natural as possible, without unnecessary computerization. It was supposed to be fresh and spontaneous. Marcin and I know each other very well because we cooperate not only in Bloodthirst but also in the organization of concerts and we also have good contact with each other in private life. He’s a young, creative man who is a real passionate person. I cannot imagine working with someone else also when recording a long play!

TO: One of the elements I like the most about ‘Hail Death’ is the darker melodies that have an ominous and foreboding feel, but at the same time have a warmer feel that makes me want to explore further and dive beneath the surface. These are balanced well with harsher sections. Can you talk to us more about the use of melody in your compositions, and is this something we can expect to hear more of in the future from UR?

UR: I’m very happy to hear that, I just love the sad melodies that bring the melancholy mood and nostalgia for a short time, to be broken up in a moment full of aggression and aggressiveness. I love the contrasts! At present we know that the new album will also be a lot of such games, there will also be a lot of monumental riffs that I would like to pay tribute to the great seventies … The new album will be an interesting development of ‘Hail Death’. 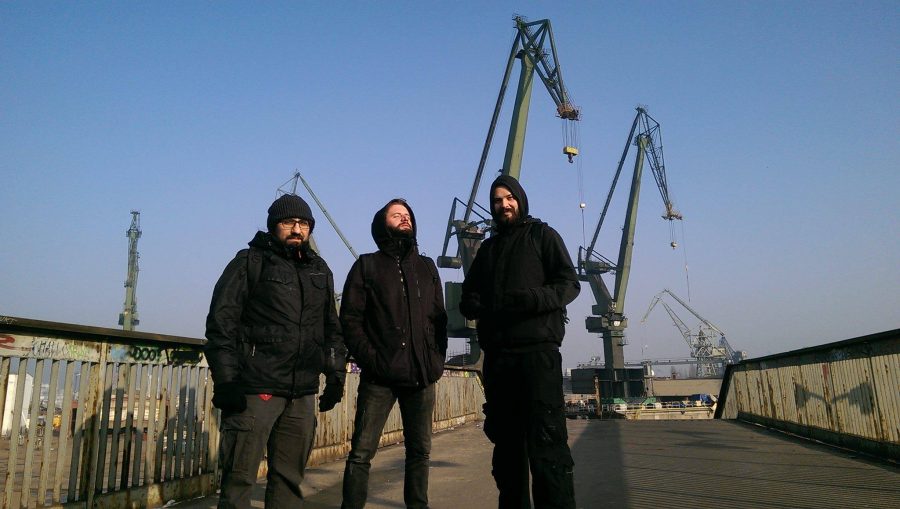 TO: I’m a big fan of the artwork, which was created by Krzysztof Sikorski. It perfectly suits your darker textures and the image of death is quite striking. What was your initial vision for the art and how do you feel Sikorski was able to bring it to life?

UR: Krzysztof is our friend and former member of Bloodstained, who now works with us as a graphic artist. His contribution to the artwork was enormous, it is 100% his work. We gave him a complete freedom because we have a lot of trust in him. I sent him music and lyrics and he painted this beautiful picture! We were delighted, it reflects perfectly what is happening on the album as there is a lot of anxiety and darkness in it. Personally I like to work with different artists; it always allows me to look at my work with the eyes of others, so over three people worked on the ‘Hail Death’ graphic. Artur Von Ritter created the logo, Krzysztof – artwork, and the layout was taken care of by Kuba – singer and songwriter of Bloodstained!

TO: The EP was released on Arachnophobia Records, which I’ve found to be a fantastic resource for Polish metal of all types. How did the deal with Arachnophobia come about, and will they also be releasing your upcoming full length later this year?

UR: The collaboration came in a rather banal way, I just sent the material to various Polish labels. And Krzysztof from Arachnophobia was the first person who responded positively and expressed the desire to release this album. I was very happy because I was counting on it quietly. He is a very honest and honest publisher who performs his job very well. We plan to play full time on September this year, otherwise it will appear under the flag of Arachnophobia Records!!!

TO: How far along is the full length at this point, are you done writing and waiting to record or still tweaking ideas?

UR: At the moment the work is already in a very advanced stage so it seems we can be pleased, but the truth is that we have a lot of delays because for the last two months we were deprived of the rehearsal room. In our city there are not many suitable places and in addition we do not enjoy a good reputation (hehe). The situation was uncomfortable and stressful even as the deadline approached, luckily for the moment we managed to find a new place and return to the game. I have already finished the songs but we still have to work on them together. We are a band so all three of us have a big influence on the final shape of the composition!

TO: I noticed you made a point in the Nine Circles interview to mention that UR is a full-fledged band rather than a side project of either Bloodthirst or Bloodstained. Given the different directions you’re going in here, have you had a lot of audience overlap? Are fans of Bloodthirst and Bloodstained discovering UR and vice versa?

UR: All the bands I play in have absolutely equal rights and I try to spend a good amount of time with each of them, which does not change the fact that UR is currently the number one band for me and I put the most work in its development. I think both Bloodthirst and Bloodstained, as well as UR, have a lot of common fans and we do not hide. The fact that I am not anonymous helped us a lot. Surely my participation in many music projects is not detrimental as each of them moves in similar views that are close to me and confirms my authenticity and sincerity. I have to add that I have recently become a new vocalist of black metal band Martwa Aura (Dead Aura), we already had a very successful stage debut and I feel very good in this band. I recommend you to listen to this band!

TO: You played this year’s edition of ProtoKultury Zagłady recently, can you tell us more about that experience? What else do you have lined up as far as live shows for 2017?

UR: This year we managed to play some quite successful concerts in Gdansk, Olsztyn and Katowice and we are going to play one more in Wroclaw. We do not have too many deals, but most importantly, on each of these gigs we have left a really positive impression. To me it is very important because metal fans should earn a lot of hard work by releasing well-crafted albums and playing concerts where blood and sweat are left!

TO: Is there anything else you’d like to say about ‘Hail Death’ or UR?

UR: Thanks for the interview. Let the darkness come!!!