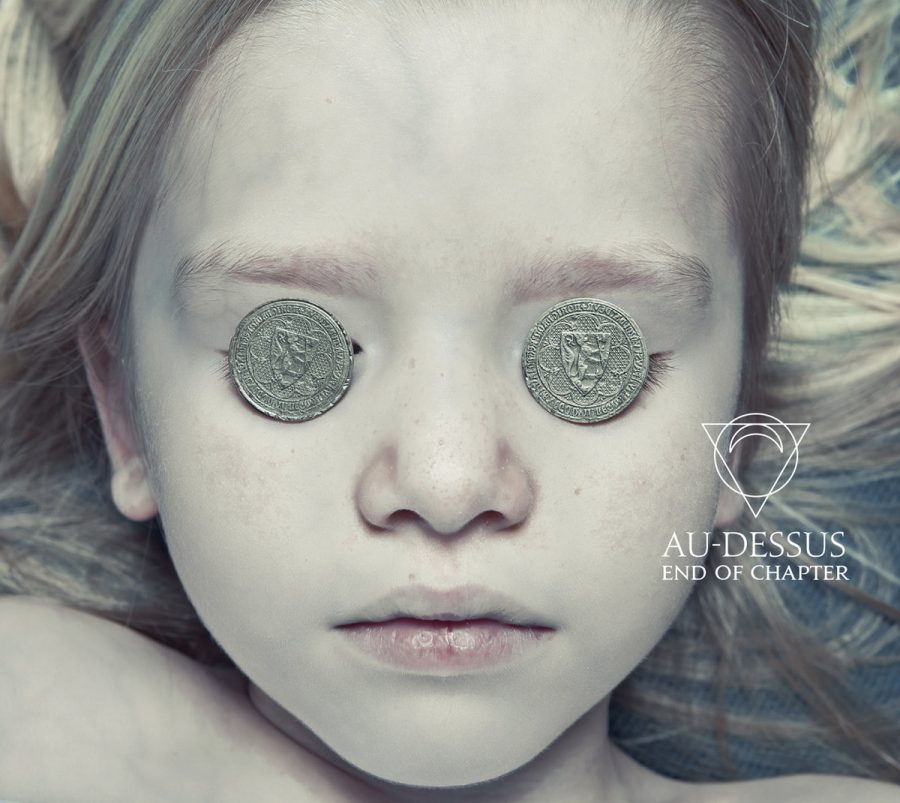 Lithuanian black metal band Au-Dessus released their debut full length ‘End of Chapter’ back in May via Les Acteurs de l’ombre Productions, and it’s the type of album that is capable of leaving a lasting impression.  While Lithuania doesn’t have quite as expansive of a metal scene as some other European countries, these guys could definitely put their country on the map for quite a few listeners.  Rather than simply sticking with the tried and true black metal sound, Au-Dessus pushes outwards and pulls in elements of post hardcore and sludge into their dense arrangements.  Sometimes the way that they layer their instrumentation is reminiscent of French acts like Celeste, as the haunting melodies and density of the music feels like it’s going to completely overwhelm you.  But there are others that have build-ups similar to post metal like Mouth of the Architect, where dark melodies continue to increase in volume until they’ve reached absolutely crushing proportions.  The balance between black metal’s grit and the dark emotional aspect of these other genres works perfectly, giving Au-Dessus a cinematic feel that will bring plenty of vivid imagery to mind.

Although Au-Dessus has been around since 2014, ‘End of Chapter’ might be many listener’s first exposure to this promising newcomer.  To find out a bit more about what went into the album we had the chance to ask drummer Šarūnas some questions.  ‘End of Chapter’ is available now on Les Acteurs de l’ombre Productions.

Transcending Obscurity (Chris Dahlberg): For those just hearing Au-Dessus for the first time, can you give us a brief introduction to the band and how you guys met?

Au-Dessus (Šarūnas) We’ve played together in other projects in the past. Au-Dessus started out in 2014 with the idea of combining musical styles that don’t seem to go hand in hand at first glance. Black metal was the foundation but genre conventions were never important to us, so we explore a more train of thought kind of method when creating music rather than sticking to a formula. Our first self-titled release came out via Polish label Witching Hour Productions and the new one ‘End Of Chapter’ was released by French label Les Acteurs de l’ombre Productions.

TO: Compared to your self-titled album, how long did the writing process for ‘End of Chapter’ take and were there any elements you approached differently this time around?

Au-Dessus: It took longer to write ‘End of Chapter’ because we had shows and tours in support of the first release.  It follows much of the same blueprint we laid out in the first one, but even more experimental and uncompromising. The compositions are likely more consistent and straightforward in some ways.

TO: Going back to the writing process, the new album has some truly stunning melodies that wash over you as you listen.  How do your songs develop from that first riff into these sprawling pieces that span a wide range of styles?

Au-Dessus: Mostly we jam together and try to capture a moment. It starts with guitars but the final outcome is determined by everyone’s input. Some arranging is done in the studio when recording.

TO: Where was ‘End of Chapter’ recorded?  What was the recording process like this time around, and did you run into any unexpected challenges along the way?

Au-Dessus: Everything, except the drums, was recorded in our studio for the first one. This time everything was done by us 100%. Our vocalist Mantas did all the work – recording, mixing, mastering. That was perhaps the biggest challenge for him to take care of everything and deliver vocals as well. Vocals were especially challenging this time – lots of experimenting and trying to come up with different approaches.

TO: You’ve kept the numbering scheme from the self-titled album; does this mean that you see ‘End of Chapter’ as a natural continuation/sequel to your debut?  Are there any similar lyrical themes that tie the two albums together?

Au-Dessus: Some songs in the new album were written before the self-titled one came out so connection between them was inevitable and the main thing that holds them together is that they were written during the same emotional and ideological period of the band. The new songs continue exploring similar topics like the first album.

TO: The artwork for ‘End of Chapter’ was done by Metastazis.  Can you tell us more about the idea you had for the cover and how Metastazis was able to portray this?

Au-Dessus: We reached out to Valnoir, gave him some music and the name of the album, and we’re very proud of what he came up with. The idea deals with mythology: in order to reach afterlife, one had to cross the Styx river on Charon’s boat and had to pay for this service with the coins left on his/her eyes. The full artwork depicts this story in three images: life/death/the river. It has a symbolic meaning for the band – a chapter of youthful innocence comes to an end and a more mature one begins.

TO: Les Acteurs de l’Ombre Productions will release the album on CD and vinyl.  What made them the right label to release ‘End of Chapter’ on?

Au-Dessus: We chose to release the new one through Les Acteurs de l’ombre Productions because we got a great offer and the label felt like a better fit for us both stylistically and musically. They’re not stuck in the past; they deal with contemporary artists, the new generation of bands that will shape the future sound of black metal. And that’s where we fit.  We have a lot of respect for other bands they work with.

TO: You released a remastered version of the self-titled album back in February.  Compared to the original master, what changes does this new master bring to the material?  What made you decide to remaster the album?

Au-Dessus: When we were recording the first album we also made sound samples which were intended to accompany the tracks and help create a certain atmosphere. We ended up not putting them on the album because of several reasons, mostly due to time limits. So in February we decided to give listeners a chance to hear the original version, the way it was supposed to be, and it was also a good chance to tweak the master a little bit.

TO: I have to admit that my knowledge of metal from Lithuania is still somewhat limited.  What are your thoughts on metal in your country right now?  What are its strengths, and what areas are there for improvement?

Au-Dessus: I would say the rock scene is much stronger than metal in Lithuania. It’s very rare to come across a promising metal band here. They should really improve their promotion and just try to get noticed, do more shows, more touring abroad. No other way to grow.

TO: Last year you went on your first European tour.  Can you tell us more about these experiences and what some of the best memories from the tour were?

Au-Dessus: A tour is an invaluable experience. We learned a lot and improved as musicians. The highlights of the tour were definitely the shows with Yob in Paris and with Oranssi Pazuzu, Conan in Helsinki. Those are some of our favourite bands so supporting them was unforgettable. Also as part of the European tour we had two shows with Mayhem and Watain in Poland. These were the biggest gigs we ever had.

TO: You have two dates scheduled in Lithuania, and you’ll be performing in Romania for the first time in the autumn at Rites of the Black Mass II.  Are there any other shows in the works for 2017, and what can people expect from your live show who have yet to witness it?

Au-Dessus: A tour is shaping up in autumn. We will definitely play more material from the new album and we will create an immersive experience both sonically and visually for the audience.