Death metal band Psycroptic are one of the well-known extreme metal acts from Australia. They have made a mark with their 6 full length albums, the latest one self titled was released in 2015. This month the band embark on their first tour of India, covering 7 cities across the country.

I spoke to drummer Dave Haley about touring Europe and North America, their upcoming album and also what to expect from their India tour.

Transcending Obscurity (Peter K): You are embarking on your first tour of India. How does it feel?

Psycroptic: It’s quite exciting to be heading to India for the first time. It’s a country that we have wanted to perform in for a long time so it’s going to be very special for us.

TO: Your 6th full length album, a self titled release, was considered by many to be among the best releases in 2015. Tell us a bit more about it.

Psycroptic: I think it’s the best album we have done – it’s still our ‘sound’ but a lot more focused and better written songs. As usual, it was produced and recorded by Joe our guitarist; each album he gets better and better at what he does. We are very proud with how it all came out.

TO: For those who have not heard your music before, which of your albums would you recommend they listen to first and Why?

Psycroptic: I would say listen to our self titled album – as that would be the most balanced and catchy album to first get into. All the albums sound a lot different from each other, but the S/T is a good starting point.

TO: What have you been listening to lately (metal and non-metal)? Are there any acts that have inspired you of late?

Psycroptic: My listening changes all the time, especially with the discover music option on Spotify. We live in a pretty crazy time for easy access to new and different music with so much ease – we are very lucky in that sense. I listen to everything from brutal death metal, to synth wave to ambient…so it’s hard to really single out any one artist. There are too many!

TO: Dave and Joe are also a part of black metal band Ruins. How do you manage between both bands?

Psycroptic: Its pretty easy – Ruins isn’t particularly active on the live front, so nothing clashes. We are all friends between both bands, and communicate a lot, so it really isn’t an issue at all.

TO: What are your thoughts on the current state of death metal?

Psycroptic: There are a lot of killer bands out there, but of course with any scene there are a lot of very average bands. This has always been the way with every kind of music of course – metal is no different. I’m still a big fan of the style after all these years playing it, but now I’m a little more selective with what I listen to. 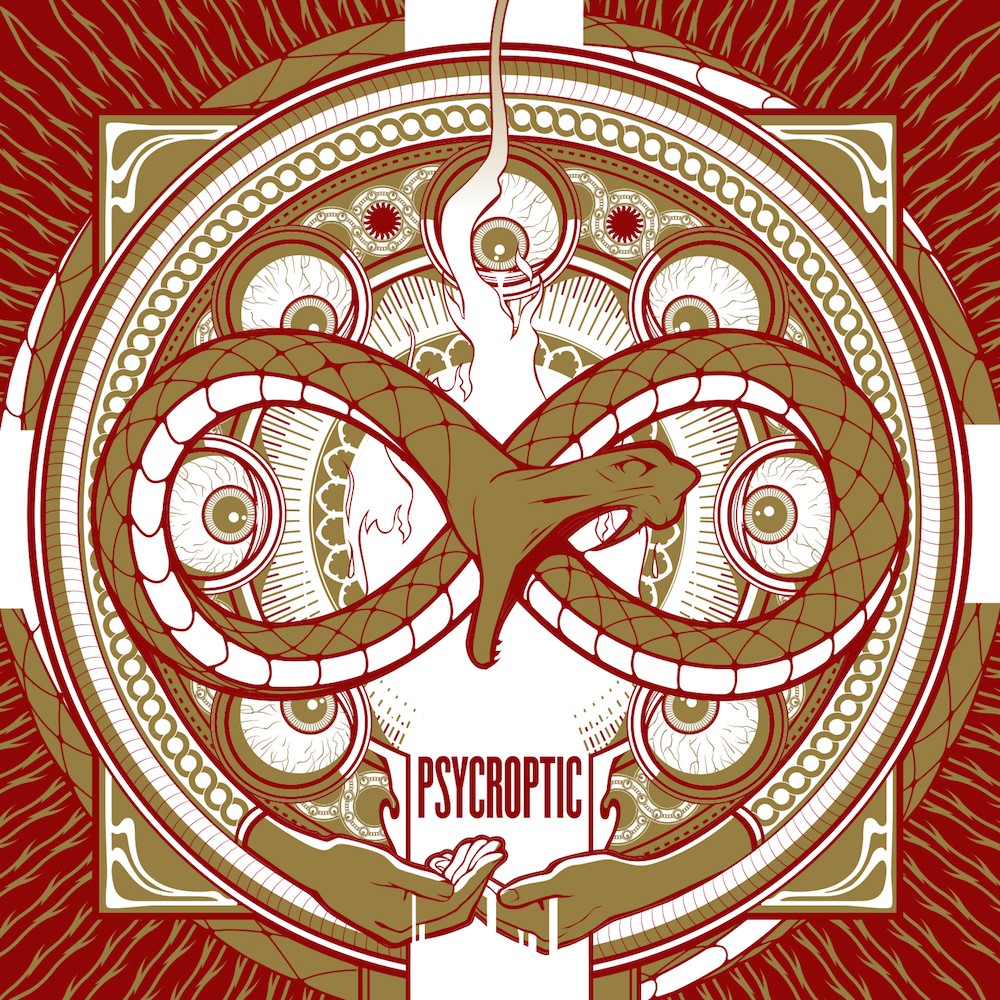 TO: It’s been a couple of years since your self titled release. When can we expect a new album from you?

Psycroptic: We are actually in the studio at the moment working on the new album – so there will be a new album from us in 2018 for sure. We are always working on new material, and thus far the new songs are sounding very cool. I’m looking forward to playing them live!

TO: You’ve toured across North America and Europe. What similarities and differences have you noticed in the audiences in both continents.

Psycroptic: There are some many similarities, and so many differences between both of them. Europe has a lot more cultural differences in a close proximity – with every country having a unique culture and sometimes a different language – all within very close drives. But North America and Europe are both within the ‘1st World’ so in terms of technology, infrastructure, etc, they are quite similar. European tours for us are a little more comfortable, as we share a bus with other bands and travel that way.

TO: What has been your favourite city/venue to perform in so far?

Psycroptic: Haha, that is too hard to answer, as there have been so many cool shows we have done…as well as a lot of not cool shows. Playing in our home town of Hobart is always pretty damn sick though. We are very fortunate to have been able to travel and tour so much. 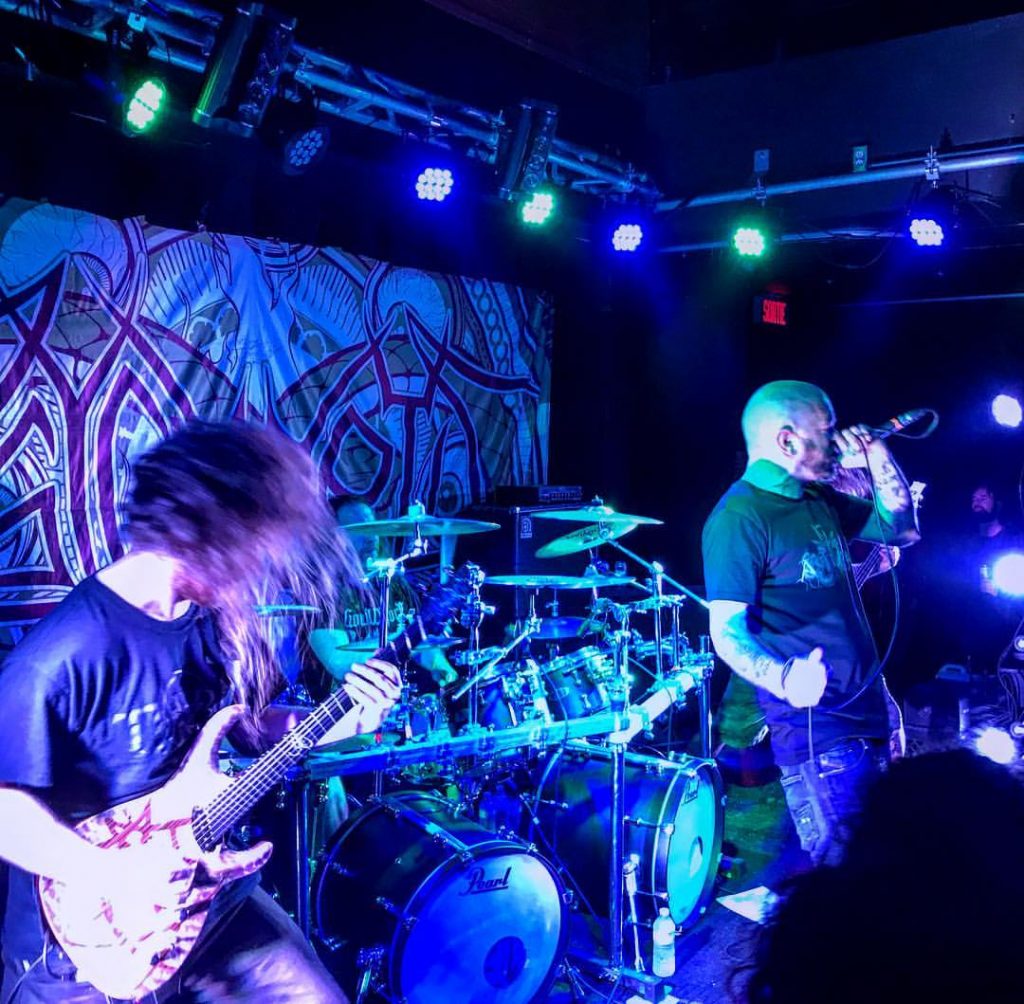 TO: Later this year, you will be supporting Dying Fetus on their European tour alongside Beyond Creation and Disentomb. How did the tour come about?

Psycroptic: Our booking agent in Europe asked if we would like to do it, and of course we said yes! It’s an insane lineup, and we’re very honoured to be apart of it. DF are one of my all time favourite bands, so to I’m really looking forward to it. We’ve toured with both Beyond Creation and Disentomb a few times and they are great friends of ours, so it’s going to be a fun one.

TO: Joe mixed and mastered the Godless EP Centuries of Decadence. What other Indian bands have you heard?

Psycroptic: To be honest, not that many! It will be really cool to check out new bands from India while we are there. From what I hear the Indian scene is small, but growing very rapidly with a lot of excellent bands developing.

TO: What are you looking forward to at your shows in India? Do you have any pre show rituals?

Psycroptic: The fact that we have never played their before is the main thing we are looking forward to. New country, new people, new experiences. Pre show we just make sure we are all warmed up and ready to play as the music is quite demanding, and requires preparation.

TO: As these are your first shows in India, what can fans expect from your set?

Psycroptic: We’ll be playing a wide range of material from all our albums. We haven’t fully settled on what we are playing, but it will definitely be a mix of material from us. It will be a lot of fun.

TO: Thanks for answering all our questions. Do you have any final words?

Psycroptic: Thanks for the interview, and we look forward to coming to your amazing country.

Indian metalheads, don’t miss Psycroptic when they play in your city, dates and venues below 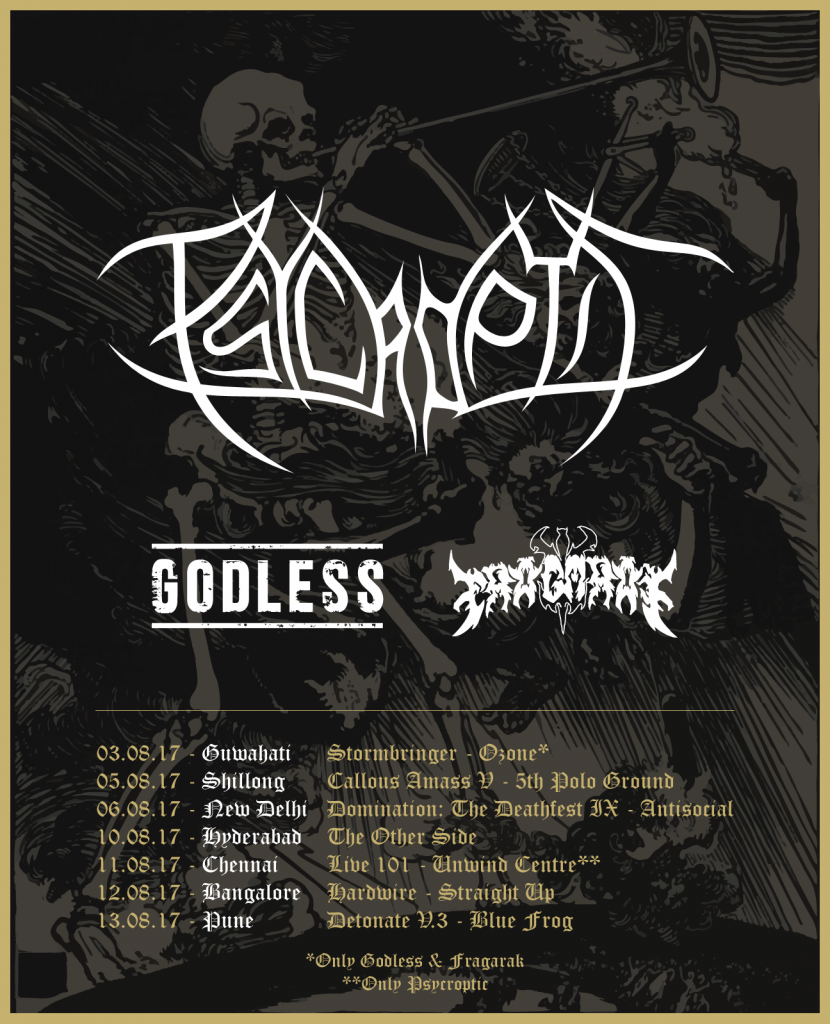