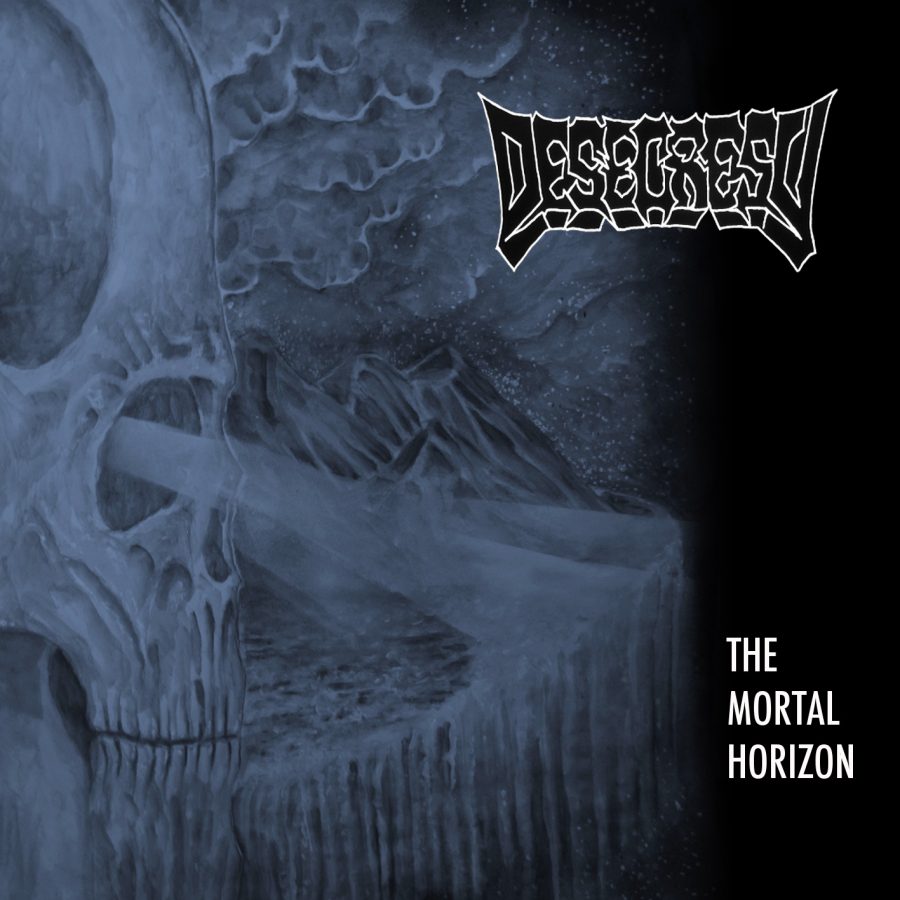 Tommi Grönqvist has been responsible for quite a bit of quality Finnish death metal over the years, as he spent over a decade with Slugathor before forming Desecresy with vocalist Jarno Nurmi.  Desecresy has put out albums at a steady pace, and even though this has amounted to four full-lengths over the span of five years each one has explored different elements of the death metal genre.  This year’s ‘The Mortal Horizon’ represents the biggest change for the band, as Jarno Nurmi left the band and now Grönqvist has stepped up to do vocals in addition to continuing to write all of the instrumentation.

Desecresy may now be a fully solo effort, but that hasn’t slowed Grönqvist and he has once again delivered an album that retains the same type of haunting, otherworldly atmosphere but pushes off in new directions.  There are two major differences that you’ll notice across each of the nine songs.  First, the tonality is overwhelmingly heavy and the instrumentals do their best to fully bludgeon you into submission.  This might be the heaviest Desecresy has ever sounded, as songs like opener Amidst unleash a sheer wall of dense riffs upon the listener.  The other big difference is there’s an increased focus on percussion and the rhythmic side of the band.  ‘The Mortal Horizon’ has been recorded and mixed in a way that makes the drums even more prominent, and you can feel each hit of the snare and bass drum.

Even with the focus on overwhelmingly heavy and dense instrumentation, there are still plenty of stand-out melodies that wash over the listener and once again create a thick atmosphere.  This is where Desecresy continues to stand out from some of the other death metal bands out there, as the songwriting emphasizes leads that make each song feel different from the last.  As for the vocals, despite the fact that this is the first time Grönqvist has taken on this role he sounds right at home, utilizing low-pitched growls that add to the bottom heaviness of the recording.  It’s another stand-out release from a band that keeps transforming and exploring different elements of death metal, and it’s hard to believe all of this is now done by one person!

With ‘The Mortal Horizon’ due out on August 14th from the group’s long-time label home Xtreem Music, we’re excited to offer you an early stream of the entire album so you can hear for yourself everything it has to offer.  We also had the chance to ask Tommi Grönqvist some questions to find out more about what went into the album’s creation.

Transcending Obscurity (Chris Dahlberg/Deckard Cain): Thanks for taking the time to answer these questions.  You’ve kept up a steady release schedule since forming the band in 2009. When did writing for ‘The Mortal Horizon’ begin and how does this compare to previous writing sessions?

Desecresy (Tommi Grönqvist): The songwriting for ‘The Mortal Horizon’ started in 2016. I had some material done before that, but none of it made it to the album. This is unusual for Desecresy since I usually have some ideas for the next album when the previous one is done. There were about dozen of tracks I worked on that didn’t make it to the album.

TO: Each Desecresy album has had fairly different tonality and emphasized a fairly different sound.  ‘The Mortal Horizon’ seems to have shifted back towards an extremely bottom heavy sound similar to that of your debut ‘Arches of Entropy’, but you’ve still left plenty of room for the atmosphere to seep in.  There also seems to be an increased emphasis on the role the drums play in the recording, adding to the aggressiveness of the album. Talk to us more about the approach to the recording and mixing on this album.

Desecresy: Guitars are more down tuned on ‘The Mortal Horizon’ than the previous albums. This gives more range as guitar leads can go comparatively higher without sounding too high-pitched. It also adds to the brutality along with the drums. A new element for the drums on this album is the slowish blast beat or forge beat if you will. There are also more tempo/time signature changes than before. The atmosphere remains an important element in Desecresy even with the more brutal approach.

TO: You’ve often mentioned in past interviews how Desecresy’s lyrics were written after the music. Now that you’ve become the sole lyricist and vocalist of the band, do you think that’s had a bearing on how you’ve written music on ‘The Mortal Horizon’? Have undercurrents of the intended lyrics guided the creation of the music at play or perhaps given it a thematic orientation?

Desecresy: It is still the case that lyrics and their themes follow the music, not the other way around. One exception though would be the track Horizon Blazing where the lyrics came simultaneously during the songwriting process. In the future I might start the process with lyrics though.

TO: Going along with the previous question, this is your first time performing vocals on an album, and I must say that you absolutely nailed it.  Having been primarily a songwriter for much of your career, how did you approach the vocals on ‘The Mortal Horizon’?  Could you have imagined years ago that you’d be doing vocals?

Desecresy: I guess I never gave it much thought before, but it wasn’t that big of a leap since I had done test vocals for vocal patterns before. I just had to find my voice (quite literally). My vocals are fairly gruntier than Jarnos in the previous albums, but that goes well with the direction that the new album took.

TO: I’ve noticed that both ‘The Mortal Horizon’ and Stoic Death’ skew towards the shorter side.  Was this a conscious decision, something of a “less is more” approach, or did the songwriting just naturally shift in this direction?

Desecresy: There is a consciouss effort to make the songs efficient and I don’t want to make any part of the song longer than necessary. That often leads to songs being on the short side. I want to bring atmosphere without growing the length of the track, which can be challenging. I think the album with shortest songs was ‘Chasmic Transcendence’ and I’m perhaps coming around to make a bit lengthier tracks little by little.

TO: One element that I think is sometimes overlooked when it comes to your material is how well the artwork ties into the music.  I believe this is something you handle yourself as well?  Can you tell us more about the role the artwork plays when it comes to Desecresy?

Desecresy: I do the graphics myself. That grants the advantage of having thematic consistency over music, lyrics, and artwork than if the artist was someone outside. Each Desecresy album has graphics in the booklet associated to the lyrics in the pages. 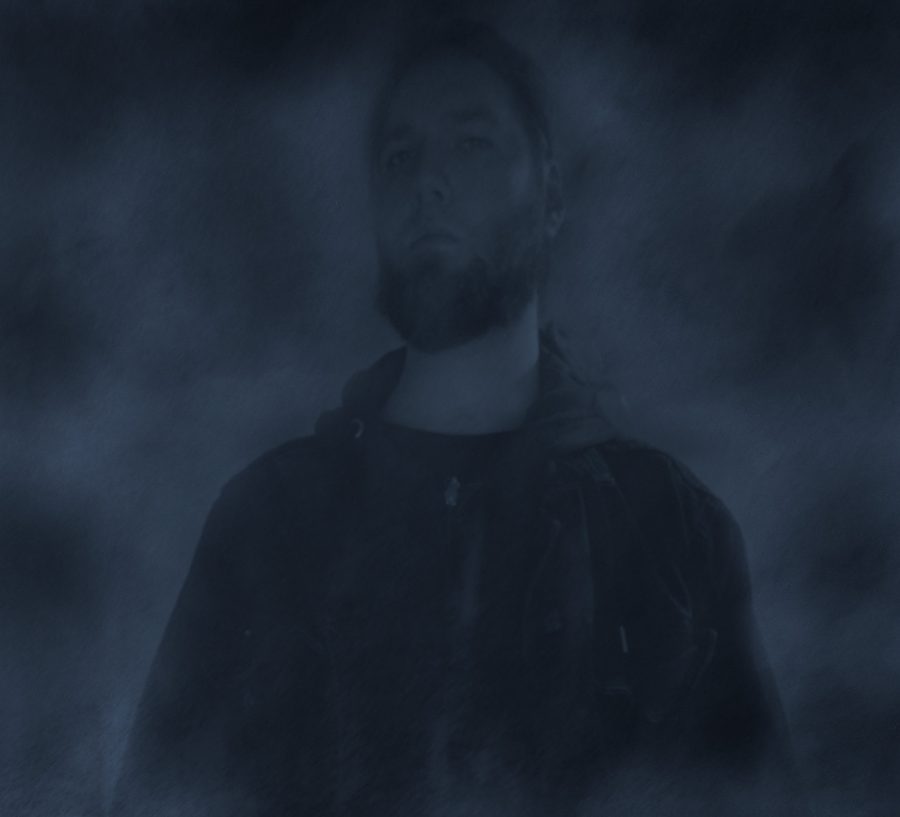 TO: You’ve released all of your material on Xtreem Music so far, a label that’s well known for quality underground death metal.  How did you originally connect with them and what’s made Xtreem the right home for Desecresy?

Desecresy: I offered the first album for Xtreem, since there were bunch of good albums released through the label. The reprints of some Finnish death metal classics caught my attention at first, but I’m glad to see there are good newer releases too. Desecresy has stayed with Xtreem because it always delivers what is promised and stays on schedule. Nothing is more frustrating than a label delaying a release for a long time. That can really cripple a band from going forward. Since there haven’t been problems like this – or of any other kind – I’m happy to work with Xtreem.

TO: ‘Arches of Entropy’ and ‘The Doom Skeptron’ were both released on vinyl.  Are you planning to eventually release the rest of your discography on vinyl as well?

Desecresy: There are no plans for vinyls at the moment.

TO: Vinyl and tape have seen a resurgence in metal over the past few years.  What are your thoughts on this, and do you have a preferred format?

Desecresy: The format is not important to me. Vinyl and even cassette have their own feel, so I can understand if people want to listen to them. Personally I don’t find cassette to give much value to the sound or listening experience. In vinyl that value is arguable but it is still a matter of personal preference, in my opinion.

TO: Is there anything else you’d like to say about ‘The Mortal Horizon’ or Desecresy?

Desecresy: Nothing to add really. Thanks for the interview! Let’s keep the abysmal wheels of death metal turning!