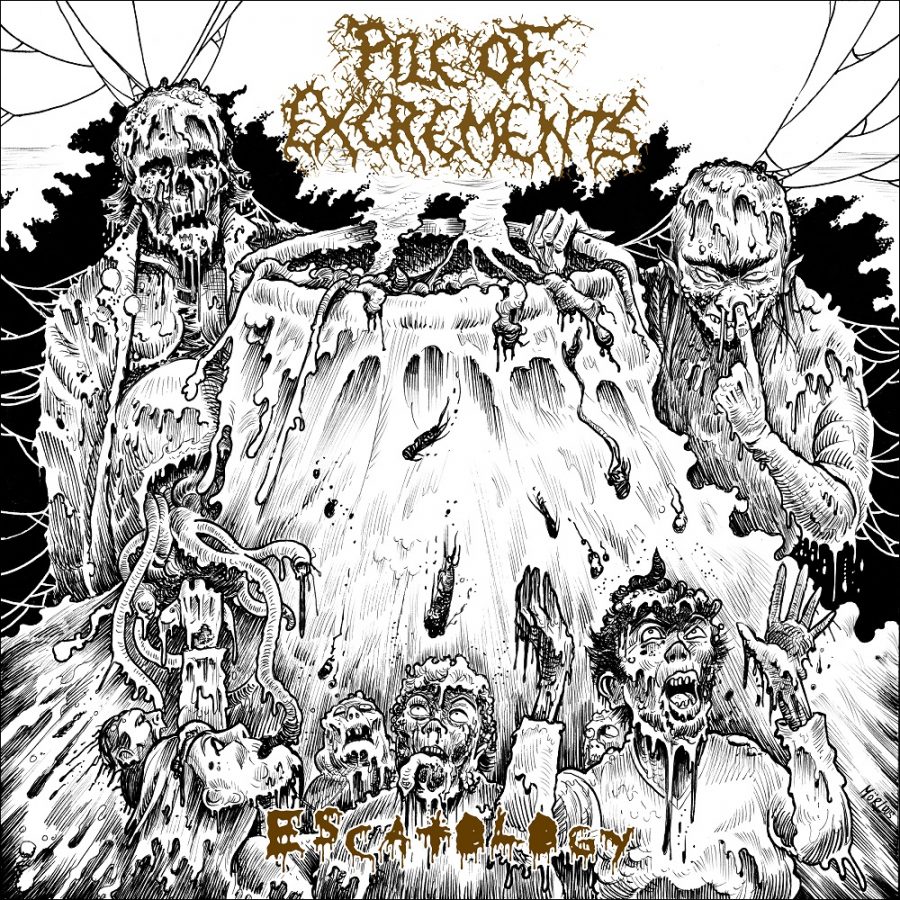 Memento Mori’s already had a standout year with killer releases from Ruin, Soulrot, and Ekpyrosis (to name a few), but they’ve still got some more quality death metal to unleash upon listeners as we approach the end of 2017. This includes the debut full length from Greece’s Pile of Excrements, ‘Escatology’.  For the type of filthy, sleazy death metal that these guys play I couldn’t think of a better band name, and while you might come in expecting third-rate death metal or low budget goregrind there’s a considerable amount of substance and hooks underneath the grime.  ‘Escatology’ is the type of death metal that doesn’t take itself too seriously (as evidenced by song titles like Cult of the Unibrow and Buttfucked by Giant Cockroach) but brings plenty of killer riffs and a ton of energy to the table.  With the release date of October 23rd a little under a week away, today we’re pleased to bring you a full stream of the record.

Greek death metal has a history of going in its own direction, but Pile of Excrements clearly has their sights set on a distinctive American influence.  Throughout ‘Escatology’ there’s a heavy Autopsy vibe, from the weight of the instruments to the filthy, grimy tonality that will make you feel like you need a shower afterwards.  But that’s not to say that these guys are trying to rewrite ‘Severed Survival’ or ‘Mental Funeral’ and call it a day, as there’s a good deal of variation to the riffing and a number of other gore obsessed death metal bands from America and Europe are sure to come to mind as you make your way through these fifteen tracks.  Pile of Excrements strikes a fine balance between slower, plodding tempos that feel like you’re drowning in a tar pit and faster songs that incorporate some hints of punk to the guitar work.  The variation works to their favor, as there are plenty of hooks hidden amongst the filth and decay, and when you’ve got a death metal take on La Cucaracha thrown in towards the end what’s not to love?

Killer riffs and production values that bowl you over with their intensity are important in death metal, but a weak or inconsistent vocalist can derail the entire thing.  ‘Escatology’ doesn’t disappoint in this regard, as vocalist Necropervert has a low pitched, distorted growl that comes off sounding truly inhuman and maniacal.  The range definitely approaches Chris Reifert levels during some of the more deranged moments, and that’s sure to make Pile of Excrements appeal to quite a few death metal fans.  Necropervert doesn’t let up throughout the entire record, and when the last song finishes it feels like he’s vomited blood all over you.

Filthy, putrid death metal always deserves a spot on my shelf and ‘Escatology’ has the riffs and hellish vocals needed to do the genre justice.  Don’t let the name fool you into thinking these guys don’t have any substance, as they’ve got a solid foundation under the layers of filth and tongue in cheek lyrics.  Check out the album when it releases on October 23rd courtesy of Memento Mori.

We also had the chance to ask some questions to founding member Necropervert, and the answers definitely live up to the album and song titles!

Transcending Obscurity (Chris Dahlberg): Since you guys are fairly new, introduce us to your band and tell us about the filth and debauchery that brought the three of you together.

Pile of Excrements (Necropervert): The band members are Shit Eater on drums, Necropervert on vocals, guitars and bass, and Pungent Hemorrhoid on lead guitars. We were recording the first Chainsaw album ‘Hill Of Crosses’ back in 2014 when the idea dropped like a hard turd in the toilet’s tranquil and calm waters. Back then it was Shiteater and me. We wanted a death metal band that was filthy, rotten, and straight from the sewer, away from the polished, complex, high tech death metal sound of the present day.  So when we finally found some time between our main bands we gave it a go. At that point we decided to bring in Pungent Hemorrhoid to play all the lead guitars and add some extra sickness in the mix. That was the recipe for the demo and we kept it through the album too.

TO: ‘Escatology’ is being released a little over a year after your demo.  How long did it take to write the album and how did this compare to the demo?

Pile of Excrements: Some ideas where there even before the demo, some songs were written a couple months later, some other songs were written in a few minutes.  Basically it took about a month to sort out the good shit from the bad shit and compile the material together. The demo was written, recorded and ready within a month.  This way you get a more spontaneous and loose feeling in your songs and your overall sound and we intend to work like that in the future too.

TO: The artwork Raul Fuentes created is appropriately filthy and horrifying.  How did you come to work with him and did you give him any initial ideas for the cover?

Pile of Excrements: Picasso was fucking dead, so Memento Mori suggested some artists and we chose Raul because of his previous works. We gave him some ideas for starters and quickly he kicked our asses with the final artwork! Raul (Mortuus) got the vibe quickly and delivered filth, disgust and disturbance balanced like a monk’s diet. Fantastic artist and a great guy too.

TO: Compared to a lot of other Greek death metal, I’m getting a distinctive American death metal vibe from ‘Escatology’.  Tell us more about some of your influences and what you were aiming for with these songs.

Pile of Excrements: It’s pointless to aim somewhere with your songs. It’s like you have a morning boner and try to pee in the dark. First of all we enjoy our music and if there are people who like it too, that’s good. We’re not doing it for a certain audience except maybe coprophilliacs. As for our influences, our favorite death metal band and biggest influence is Autopsy. Then come Cianide, Abscess, Master, Pungent Stench, Massacre, early thrash bands like Onslaught and Hellhammer, and of course early punk and hardcore mostly from the UK scene.

TO: Are you guys planning on playing live or is Pile of Excrements going to stay a studio project?

Pile of Excrements: We haven’t talked about it yet. We might wake up in a week and decide to give it a go as a full rehearsing band that’s ready to take its vomit to a live audience or remain a studio band until we’re in our third age and shit in diapers. 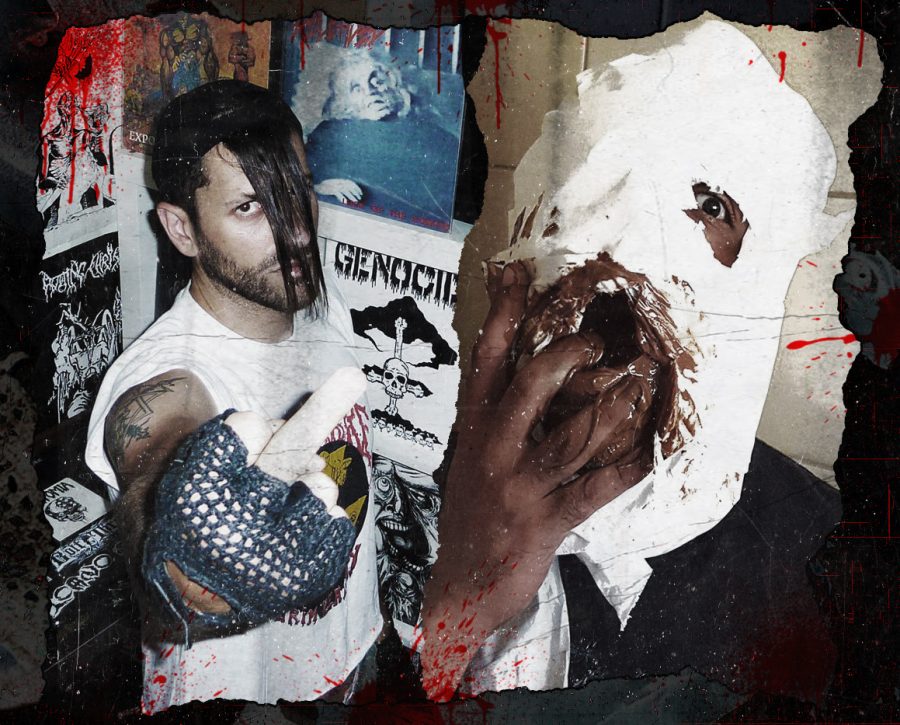 TO: Buttfucked by Giant Cockroach has a death metal take on La Cucaracha.  This fucking rules.  Who in the band came up with that?

Pile of Excrements: I did. I saw a video of Pungent Stench playing La Bamba in Mexico and got the idea of putting a well-known “happy” melody in a death metal song. So when I came up with the lyrics of the song it came really natural to use this one. As it turned out most people who listened to the track liked it. In the future we plan to molest My Little Pony or use blast beats under the theme song of the Titanic.

TO: Drummer Shit Eater seems like he’s on a mission to be in every Greek black/death metal band.  How long until he achieves complete domination?

Pile of Excrements: The myth says that when he was five, he ate a dead ferret which carried supernatural drumming powers and they were all passed onto him. Now the truth is that he plays in every Greek band but sometimes he uses a different name or a different face. He can also adjust his height and his brightness/contrast.

TO: As fans of everything B-movie and gore related, what are some B-movies that are underrated and our readers should check out.

Pile of Excrements: Apart from the classics Re-Animator, Braindead, Bad Taste and Cannibal Holocaust which are a must, some of our favorites are Demons, Basket Case, Hollywood Chainsaw Hookers, Men Behind The Sun, Pussy Talk, Mangiati Vivi (Eaten Alive), Blood Sucking Freaks, New York Ripper, Street Trash, Deadbeat At Dawn, Dead Snow, Living Dead At The Manchester Morgue and all Troma films.

TO: How hard is it to get into the Cult of the Unibrow?

Pile of Excrements: Nearly impossible. The demon guarding the entrance to the cult’s dungeons can tell if you have a real unibrow, implanted hair or are wearing a Halloween moustache upside down between your brows. You can’t fool him easily.

TO: Is there anything else you’d like to say about ‘Escatology’ or Pile of Excrements?

Pile of Excrements: The album has some hidden high frequencies that drive pigeons away, so if you‘re having a problem with flying rodents crapping your neighborhood it can help you get rid of them.  Apart from that, SPREAD THE TURD!