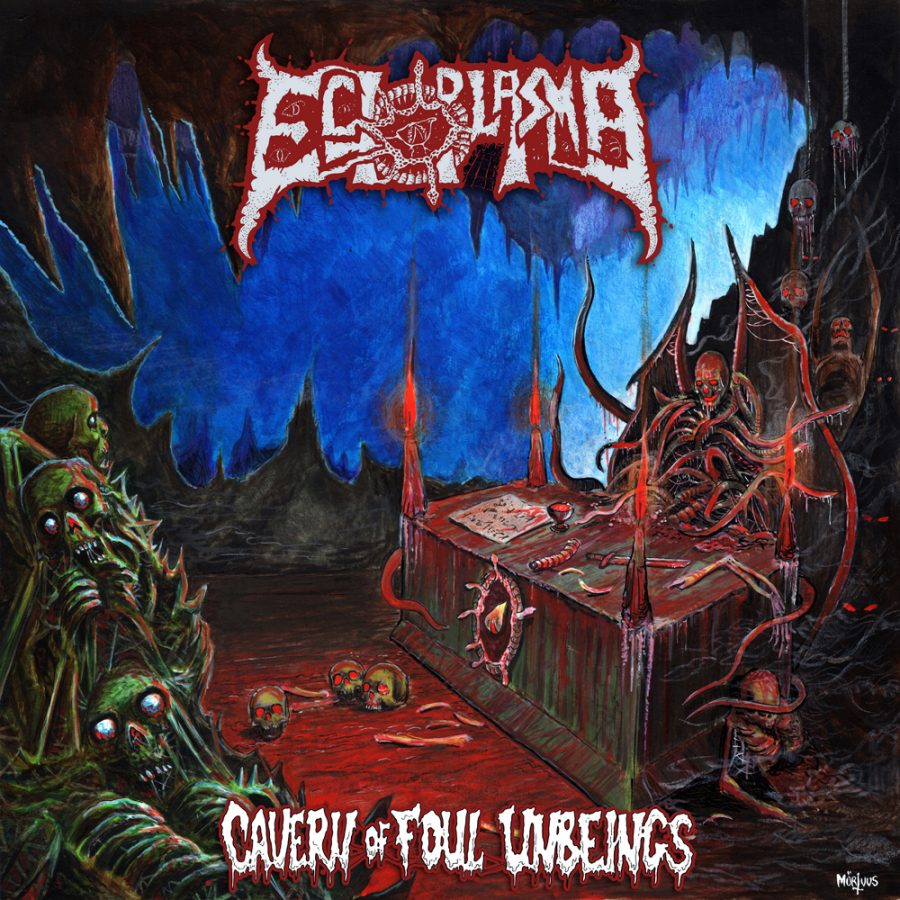 Memento Mori had a pretty packed year in 2017, releasing a considerable amount of quality death metal from all around the world.  The label isn’t slowing down at all this year, as they’re putting out three albums today that are sure to catch your attention if you’re a fan of anything death metal related.  One of these is the sophomore effort from Greece’s Ectoplasma, ‘Cavern of Foul Unbeings’ which comes two years after the group’s full length debut and ‘Skeletal Lifeforms EP’.  Fans of murky, horror influenced death metal will want to take note as this album has some killer writing, and today we’re premiering the entire release so you can hear for yourself.

Compared to their previous material, Ectoplasma has opted for slightly more clarity this time around without sacrificing the grime and bottom heaviness they showcased previously.  What this means is the guitars are front and center rather than blending in with the rest of the sound, which allows the riffs to come through and really showcase what each song is able to bring to the table.  It’s a shift that works in the band’s favor, as they still have some of that murky, eerie tonality but there’s enough space between the individual elements to tell each track apart.  There’s a lot to like about the songwriting on ‘Cavern of Foul Unbeings’ as the band lets the grime and grit build during slower segments before launching right into faster attacks.  Add to that the growls of Giannis Grim which spew forth horror inspired lyrics alongside some well-placed sound clips and you have a worthy release that feels appropriately old-school.

Ectoplasma’s offered up killer death metal that had a definite old-school flair to it previously, but with the improved production values on their sophomore album they’ve taken everything to the next level.  2018 may have just started, but these guys are worth paying attention to.  With the album out today, we had the chance to ask the band some questions to learn more about ‘Cavern of Foul Unbeings’.

Transcending Obscurity: Thanks for taking the time to answer these questions. Your second full-length “Cavern of Foul Unbeings” is coming out on January 22nd. When did you guys start writing this material and did you approach any aspects of the writing process differently from before?

Ectoplasma: Hello and thank you for this interview. We started composing material one year ago as soon as we finished with the recordings of our previous EP ‘Skeletal Lifeforms’. What we did was the same as always, bringing our ideas and jamming in the studio to ‘’catch the feeling’’ of our songs and then we worked a bit on the structure of every track. When we ‘’sealed’’ a track as finished we wrote it in Guitar Pro to practice it and get ready for the recording. Simple and plain like this, nothing more nothing less.

TO: Drummer Maelstrom joined Ectoplasma last year, and this is his first recording with you guys.  What made him the right choice to take over on drums and how has he added to the dynamic of the overall band?

Ectoplasma: Giannis Botsis or Maelstrom is not just a simple drummer, he is a beast. He pounds the drums like a sledgehammer and he is fast as hell!!! When our previous drummer George left the band, Giannis B. was the first who came in my mind to join the band. In my point of view, from all the drummers here in Greece, Giannis B. is the most aggressive and most primitively savage drummer who could fit perfectly in Ectoplasma. I think that with his performance and ideas the band leveled up and we are all extremely satisfied.

TO: “Cavern of Foul Unbeings” is just as murky and crushing as your previous releases, but I noticed some clear changes to the recording this time around.  In particular, the guitars are a bit clearer and steal the spotlight more so than before. Tell us more about the recording process this time around and how it differed from your past material.

Ectoplasma: Yes, the guitars are clearer this time but the heaviness and distorted mud still exists and this combination is what we wanted. This time we worked with a man who knows what he is doing and this man is Haris Vougiatzis of Eleventh Tower Studios who also plays in Embrace Of Thorns and War Possession. We recorded the guitars at home and we found the sound we wanted at the studio with the re-amp method and Haris helped us a lot with his knowledge and experience.

TO: Your use of samples adds to the haunting, supernatural atmosphere present on the album.  How did you choose these samples and do they tie into the lyrical content as a whole?

Ectoplasma: We love horror movies and we always wanted to combine our music with some legendary horror movie quotes or scenes that chilled our spine when we watched them for the first time. In the track Primeval Haunting we added the intro from the movie ‘’The Beyond’’ of Lucio Fulci, where the blind woman Emily tried to warn Liza about the primordial evil that will come back to life. The lyrics are a brief description of the haunting presence that dwells in the atmosphere of the movie. In an abandoned hotel which is renovated and re-opened, a gateway to hell opened and horror revives in ultimate form… Blood, strange unexplained murders, evil spirits, the book of Eibon and hordes of the undead coming alive… Death Metal Absolution!

In the track Seized in Cimmerian Darkness we used the words of Thulsa Doom from Conan The Barbarian (‘’Infidel defilers shall all drown in lakes of blood, now they will know why they are afraid of the dark, now they will learn why they fear the night’’) because the track is about Cimmerian people. Cimmerians in accordance with Greek Mythology was a race who lived in total darkness at the edge of the world at the entrance of Hades. In the track Reanimated In Trioxin we used as intro the scene from the movie ‘’Return Of The Living Dead’’ of 1985 where the captive zombie which was brought back to life due to the Trioxin outbreak is saying that hunts people for their brains and the track is all about that, reanimated zombies hunting for flesh and brains in a pandemonium of mutilation and savagery. 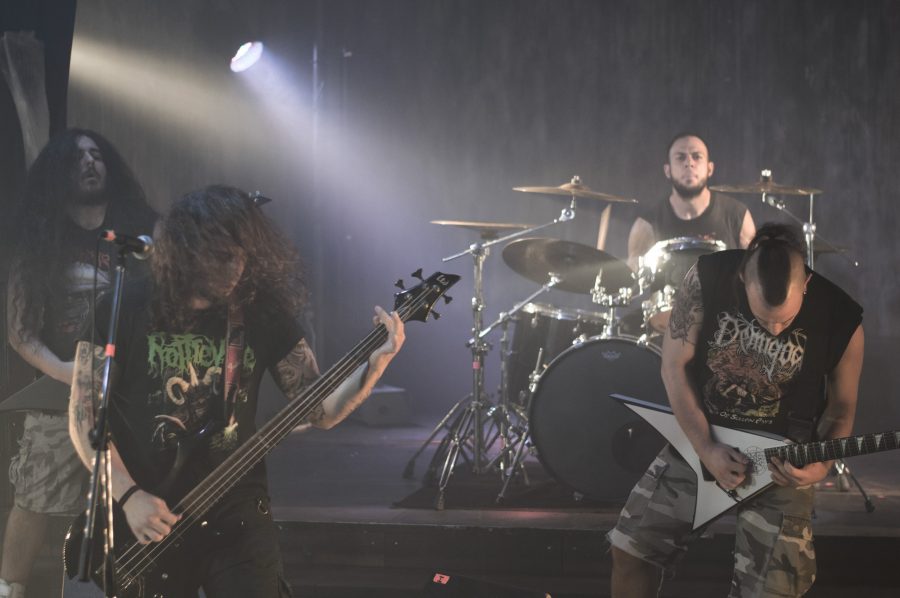 TO: Each of your main releases has featured a different cover track.  You’ve previously covered Autopsy and Demigod, and this time around you’ve dong a killer cover of Unleashed’s The Immortals.  What made you guys want to tackle this particular song?  Are there any more covers that you play as a band that haven’t made it onto a recording yet?

Ectoplasma: There is no particular reason for the cover songs that we choose to record in the albums or to play live. We just love some bands and we love more to play their songs. I wouldn’t say that we play covers to demonstrate our influences, it is just a matter of our desire to play those covers. Nothing more, nothing less.

TO: Memento Mori will be releasing the album on CD.  Your previous material has also been released on cassette, are there any plans to put out “Cavern of Foul Unbeings” on other formats later in 2018?

Ectoplasma: Yes, it will be released in vinyl format through Flesh Vessel Recs from Texas.

TO: In addition to the album, you have a five-way split with Carnal Tomb, Rotten Hate, Soulrot and Anarchos coming out in 2018 on Canometal Records.  What can you tell us about your contribution to this split?

Ectoplasma: Oscar from Canometal Recs invited us to participate in this split with our tracks from our first demo recordings. He wanted to choose 5 Death Metal bands and make a split with their primitive demo tracks, and of course we couldn’t say no to this great idea!

TO: Greece continues to product plenty of noteworthy Death Metal bands that pull from different sides of the genre.  What are your thoughts on Greek Death Metal and how has it changed over the years?

Ectoplasma: Great question, I will not answer objectively but straight from my point of view. I like many Death Metal bands from my country such as Inveracity, Sarcastic Terror, Death Courier, The Psalm (Ex-Nocturnal Vomit), War Possession and many other bands outside of Death Metal like Necrochakal, Slaughtered Priest, Rapture, Mentally Defiled, etc. I think that Death Metal here in Greece has changed a lot and it is getting angrier, heavier and contagious like a festering wound ready to expel the pus and infect the next one.

TO: Do you have any live performances planned for 2018 to promote the new album?

Ectoplasma: Until now we don’t have any shows planned but of course we will arrange it.

TO: Is there anything else you’d like to say about “Cavern of Foul Unbeings” or Ectoplasma?