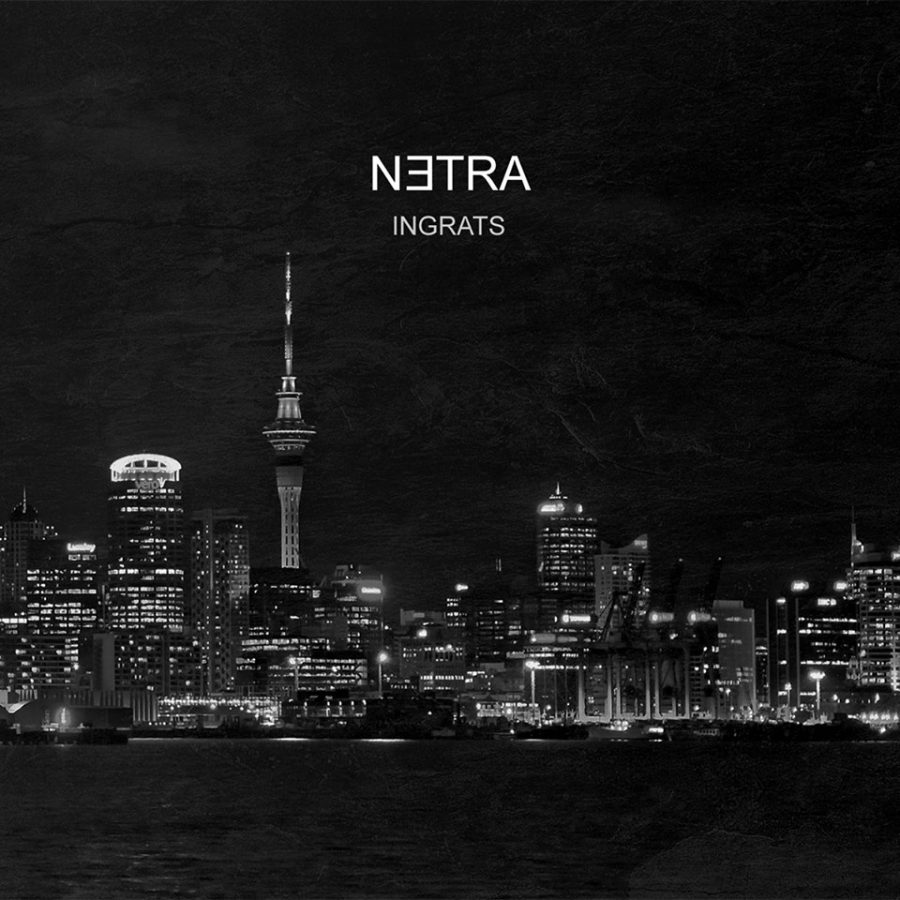 Since the release of ‘Mélancolie urbaine’ in 2010, netra has been blurring the lines between genres.  The one man project was originally based in France, later relocating to Norway, which influenced the themes on sophomore effort ‘Sørbyen’.  What netra was able to do on both of those releases was to take harsh, abrasive elements from depressive black metal and weave in trip hop, jazz, and other electronic/experimental sounds to create something that felt genuinely different.  One of the consistent elements has been melancholic, dreary soundscapes that are created with both aggressive and melodic sections.  In 2013 netra branched out further, collaborating with rap duo We’rewolves on the ‘Dreading Consciousness’ EP.  Now the time has come for the third full length from this project, ‘Ingrats’, which Hypnotic Dirge Records will be releasing on March 9th.  Today we’re bringing you an exclusive premiere of the song Everything’s fine, and whether this is your first time coming across netra or not you’ll find this project to entice you with a sound that’s not quite like anything else out there.

Everything’s fine is the second song on ‘Ingrats’, and it follows an opening track that has a mellow, jazzier feel that has a film noir feel to it.  If this is your first time hearing netra, this intro is likely to lull you into a false sense of security before Everything’s fine jolts you with its ear piercing shrieking and aggressive layers of instrumentation.  Perhaps it’s appropriate that this early on in the album the instrumentals and vocals deliver some of their harshest and most depressive moments before delving into somber clean singing and experimental passages, as it serves as a good representation of the level of diversity the rest of the album is able to provide.  The black metal sections are drenched in raw emotion, with the shrieking capable of sending shivers down your spine as the guitar leads twist and turn with jagged edges.  But the further you get into Everything’s fine, the more it becomes clear that there’s a lot more to this piece.  As the guitars and shrieks fade out, the tempo slows down and an eerie piano melody drives the song forward alongside some somber singing that has a gothic rock tinge to it.  The sudden transitions between the mellower and chaotic sections are implemented perfectly, and just when you’ve started to wallow in the calmer melodies netra stabs you right in the throat with jagged edges.

The rest of ‘Ingrats’ is able to blur the lines between genres just as well as this song, and we hope you find this first taste of the album to be an enticing listen.  Plenty of artists have tried to step outside of established black metal frameworks to convey a sense of isolation and depression, but few have incorporated these additional elements as naturally and creatively as netra and this is yet another album from this artist that you can lose yourself in as you discover more and more nuances.  ‘Ingrats’ is out March 9th on Hypnotic Dirge, and we had the chance to talk with the project’s creator to learn about the new material, which can be read below.

Transcending Obscurity (Chris Dahlberg): Thanks for taking the time to answer these questions.  A few years have passed since the release of ‘Sørbyen’ and the ‘Dreading Consciousness’ collaboration.  When did writing for your new album ‘Ingrats’ begin and how long did it take to come to fruition?

netra: I would say it took me about three years to produce this album. I started not long after the release of ‘Dreading Consciousness’ in 2013, and most of the material was actually written in a few weeks. It was quite a creative period for me. Unfortunately, I then had to focus on other things, which led to significant delays in the production process and it’s not until a few weeks ago that the album was finally ready.

TO: We’re premiering the song Everything’s fine alongside this interview.  Can you tell us more about that particular track and where it fits with the rest of the songs on ‘Ingrats’?

netra: That track is somewhat representative of the album in my opinion. It has got this broad range of tones and atmospheres, it is raw and honest… That being said, each song on this ‘Ingrats’ is different in that they all tell a particular story. Everything’s fine is about the boredom of routine and how easy it can be to fall into it.

TO: You’ve lived in Kemper and Gjøvik, and I saw it mentioned in an interview around the time of ‘Sørbyen’ that you were in Germany.  Where are you located now, and how did your current location influence the new album?

netra: I was indeed in Germany when I started to write material for ‘Ingrats’ and I moved twice since then, first back to Norway then recently to New Zealand. It is hard to say exactly how these places have influenced my writing, it is more the overall experience of moving around that inspires me I think.

TO: Netra continues to utilize extremely harsh screaming alongside more somber clean ranges.  Are there any singers/vocalists in particular that have had a particular influence on you?  How do you feel your own vocal performances have progressed from your earlier work?

netra: I cannot really think of any particular vocalist who would have an influence on me. I mean there are many whom I admire, sure, and you may think that my voice resembles that of someone but it is not like I do it on purpose. I have my own voice, it is not perfect but it is mine and I try to use it in the most natural way possible. I do try to improve my singing of course and I think it got better over the years. I have never practiced screaming though as I believe it should be raw and honest.

That track is somewhat representative of the album in my opinion. It has got this broad range of tones and atmospheres, it is raw and honest…

TO: I’ve always found jazz to be an incredibly expressive genre that can take on a very dark connotation, and I continue to enjoy your infusion of these elements into netra’s albums.  You’ve mentioned Bohren & der club of gore as a prominent influence previously, and they offer a decidedly different take on jazz and its variations.  Are there any traditional jazz artists that you’ve found to have similar appeal?

netra: Many names come to mind, like Archie Shepp’s ‘Blasé;, Miles Davis’ ‘Ascenseur pour l’échafaud’ or Charles Mingus’ ‘The Black Saint and the Sinner Lady’ to cite a few. You might not find these “dark” per se, but they do have in common this nocturnal vibe which I love.

TO: The previous two albums had a wide variety of film samples incorporated into the music.  I heard what I believe are samples on Don’t keep me waiting and Jusqu’au-boutiste.  Can you shed some more light on these?

netra: Yes, I guess you could say I am a cinema enthusiast. On these two tracks, I used samples from “L’exercice de l’État” (P. Schoeller, 2011) and “Low Down” (J. Preiss, 2014), respectively. Both samples were chosen quite carefully so as to fit the songs.

TO: You’ve done music videos for both of your previous full lengths, are there plans to do a video for one of the songs off of ‘Ingrats’?

netra: Indeed some music videos were made for the previous full-lengths but I cannot say that they truly reflect what I have wanted for netra. That being said, I definitely would like to have some new video material done for songs off of ‘Ingrats’.

netra: Initially, We’rewolves were the ones who contacted me about a collaboration. I must say that I am very happy that they did! I took care of the music while they did all the lyrics and vocals. Looking back at it, I think it was a natural step in netra’s history and I sure would love to do this type of thing again in the future.

TO: The majority of your material has been released digitally and on CD.  As a lot of music consumption has switched to digital over the past decade, what are your thoughts on physical release formats?  Do you have any interest in vinyl or do you prefer CD?

netra: I like CDs most because that is what I grew up with. I understand the vinyl hype but I think that only some types of recordings should be released on such format. I feel that netra’s music is too “digital” for it, that would not make much sense.

TO: Hypnotic Dirge has been your label home since 2010’s ‘Mélancolie urbaine’.  What has made the label the right place to release your material, and how have you found the general level of support to be?

netra: I have always received a great deal of support from HDR from the beginning. The communication is good, the music gets a decent exposure, I am happy with it. That being said, I do not exclude the possibility of working with different people in the future.

TO: Is there anything else you’d like to say about ‘Ingrats’ or netra?

netra: Just listen to the new album if you haven’t already. Like netra’s previous productions, that one is quite rich and dense and it requires a certain level of patience and open-mindedness. Just give it a chance. I also would like to take this opportunity to thank you, the readers, as well as all the people who have been supporting netra from the beginning.